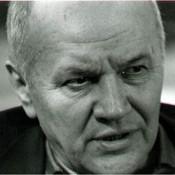 (Italy, 1927)
Biography
Giampiero Neri (the pseudonym of Giampietro Pontiggia) was born in Erba, in the province of Como, in 1927. He lives in Milan. His life has been marked by tragic events – the death of his father, who was killed when Giampiero was sixteen, the suicide of a sister in her twenties – which appear, however, only indirectly in his poetry. A bank employee, he has cultivated entomological and literary interests since his youth.
His first book of poetry, The Western Look of Dress, appeared in 1976, when the author was forty-nine, and it was immediately noted for its originality. Neri’s style is as removed from the lyrical tradition of the nineteenth century as from the avant-garde experiments in great vogue in the seventies. His texts, concise, dry, veined with melancholy and subtle humor, often written in prose, have the formal and objective tone of a police report and the voice of an encyclopedia (“The large Pavonia or Saturnia/ the Atropos butterfly and other nocturnal species/ are notable exemplars of mimetism”). His poetry loves to present itself as an inventory of information, from which however emanates the atmosphere of dreams or of hallucination. Neri leans towards the short story, but his narratives, puzzling in their lacunae, rarely lead to denouements: the revealed facts only render the world’s enigma even more obscure. Shy, reclusive, this poet has been at work for forty years without ever seeking public attention, but his opus has influenced many poets of the next generation, and he has earned firm approbation from more discerning readers.
© Umberto Fiori (Translated by Ron Banerjee)
Bibliography

Where would Don Rodrigo’s mansion be located

That pastry and coffee house in Como

Of those uncertain shadows