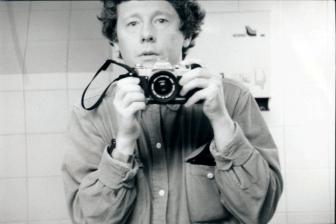 (Belgium, 1955)
© Jan H. Mysjkin
Biography
Jan H. Mysjkin, poet and writer, leads a semi-nomadic existence between addresses in Paris and Bucharest. He studied film production at the RITCS in Brussels, followed by philosophy and literature at the Rijksuniversiteit (State University) in Ghent. As a poet, he has consistently pursued a course that focuses on the experimental, linguistic aspect of poetry. He made his debut in 1985 with Vormbeeldige gedichten (Exemplary poems), which included an afterword by the experimental writer Ivo Michiels. An identical affinity with experimental writing is evident not only in the poems themselves but in his correspondence with Pol Hoste, included in Mysjkin's second collection Spel van spiegels/Sonnetten in beweging (Play of mirrors/Sonnets in motion; 1990).
Since the collection Voor mijn ogen ligt het zwijgen (Before my eyes, nothing to say; 2010), Mysjkin has carried out an adventurous and experimental investigation of language – which comprises nine sections and is rounded off by a coda in Dit is nobel gezegd, maar duister (This is nobly said, but obscure; 2014). In the opening section, the poet embarks on a surreal packet boat on which nothing remains the same. In the first poem of Rekenkunde van de tastzin (Arithmetic of the sense of touch, followed by Spchlss, sndlss; 2011), the ‘I’-figure goes ashore on a continent unknown to him. A journey through words and worlds, images and poetic forms takes shape in the remaining sections. In the coda, the poet takes the ship back home, although everywhere during the voyage he has felt himself at home.

It is striking that Mysjkin also includes a number of translations of poems, made by close fellow-translators, in these collections. As a translator, Mysjkin has presented almost all of post-war French poetry to the Dutch-speaking public. The span of his translations has resulted in the series Levende Franse poëzie (Living French poetry), published by PoëzieCentrum in Ghent. This series has already featured three fine anthologies that include poems by such writers as Yves Bonnefoy, André du Bouchet, Jacques Roubaud, Tristan Tzara and André Breton. A fourth volume, which just recently appeared and covers the 1980-2000 period, comprises poems by such writers as Yves di Manno, Jean-Paul Auxeméry, Olivier Cadiot, Pierre Alféri, Véronique Pittolo, Katalin Molnár, Christophe Tarkos, Nathalie Quintane and Jean-Michel Espitallier – the generation of French writers with which he feels a close affinity. After giving a general introduction to the period, Mysjkin provides information about each individual poet, a bibliography and a selection of poems. He also has translated an interesting selection of texts from the Dada movement, published as separate booklets in the Dada library of the Nijmegen publisher Vantilt. Mysjkin also has produced the first complete translation into Dutch of Alexandre Dumas’ masterpiece The Count of Montecristo, which was awarded the Dr. Elly Jaffé Prize in 2012. In collaboration with the French poet-translator Pierre Gallissaires, he also translates into French, thereby providing a French-speaking public with a fine sample of post-war Dutch-language poetry.

Since 2005, he has also translated Romanian poets into Dutch, as well as a considerable number of Dutch-language poets into Romanian in collaboration with Linda Maria Baros, and later with Doina Ioanid. In late 2014, this resulted in a 200-page, substantial anthology of 15 Flemish poets, Lumina ultimei zile, the first of its kind in Romania for half a century.

Mysjkin is also a frequent guest at prestigious international poetry venues, such as One World Poetry in Amsterdam, the Poetry International Festival in Rotterdam, the former festival Dichters in het Elzenveld and its successor Felix Poetry Festival in Antwerp, as well as at poetry venues in French-speaking Belgium, France, Romania and Serbia.

Prizes
1990: Staatsprijs voor Vertalingen (State Prize for Translation)
2009: Brockway Prize, awarded to Mysjkin and Pierre Gallissaires for their translations of, among other things, the poetry of Gerrit Kouwenaar and Paul van Ostaijen into French
2011: Translation prize of the Romanian festival Poesis International at Satu Mare for his translations from Romanian.
2012: Dr. Elly Jaffé Prize for the Dutch translation of Le comte de Monte-Cristo (1844) by Alexandre Dumas, published in 2010 by Uitgeverij L.J. Veen in Amsterdam