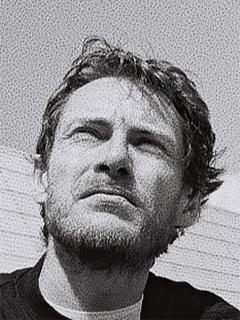 (France, 1963 - 2004)
© Pieter van der Meer
Biography
Born in Martigues in 1963, Christophe, who had not yet selected the name Tarkos, spent his childhood and youth there as well. He then continued his studies in Aix-en-Provence in political science (which did not prevent him from taking courses in literature and philosophy) and successfully completed CAPES (Certificat d’aptitude au professorat de l’enseignement du second degré; a French teaching certification) in economics and social sciences. After becoming a teacher, Tarkos spent several years in various locations, notably in Dunkerque. Meanwhile, and for quite some time already, he wrote and became deeply interested in contemporary poetry, primarily in its engagement with sound, alongside Thierry Aué, a musician and Tarkos’ longtime friend. His first influences were the eclectic trio of Artaud, Blanchot and Beckett, and, for poetry, Gherasim Luca. After returning to Provence in the early 1990s, where he frequented the cipM (Centre international de poésie Marseille), Tarkos decided to give up teaching and to devote himself entirely to poetry.
In Nathalie Quintane and Stéphane Bérard, with whom he stayed in Lardiers, Tarkos found accomplices to appreciate and to share his caustic ferocity and humor, an attribute we later find in each issue of the journal R. R. Shortly afterward, having installed himself in Marseille, ‘Christophe Tarkos’ manifested himself through performances, continuing and realizing the written projects l'oiseau vole (The bird flies) and Processe, which were published thereafter. In fact, for him as well as for many of the contemporary poets gathered in DOC(K)S – a journal in which Tarkos published a number of poems – the writing thrives in performance as much as it does as text, and, along with 20 other examples, a performance such as “la Purée” (The purée) loses a large part of its meaning when amputated from the poem titled “le Compotier” (The fruit bowl). Moving on to Paris, and now living in the company of his future wife, Valerie Tarkos, Tarkos continued to produce such écrit-action (writing-action). In Paris, he met and began to collaborate with Katalin Molnár and Charles Pennequin around the journal Poézie Proléter, which led Tarkos to becoming interested in, as an extension of his work in sound, exploring an orality implemented in semi-improvised performances, such as ‘le Monde Magique’ (The magic world’), ‘Le Bonhomme de merde’ (The snowman of shit), ‘le pneu’ (tire), ‘je ne fais rien’ (i do nothing), "le petit bidon" (the little container) and ‘Je gonfle’ (I blow up).

Simultaneously, the pace of his publications accelerated, often based on the recuperation or the tireless reworking/re-envisioning of very old texts. It is difficult to say what all of this could or should have led up to, as an illness in the early 2000s brought it to an abrupt halt. But without much alteration is that which constitutes the particular profoundness of Tarkos’ oeuvre and produces its remarkable coherence: it is expression, which in any domain and in any format registers as a thought transcending all domains, that also connects literature and the arts, such as poetry, philosophy, mathematics and the sciences, into a single encyclopedia: ‘poetry is an intelligence’.
© Philippe Castellin (Translated by Mia You)
Bibliography