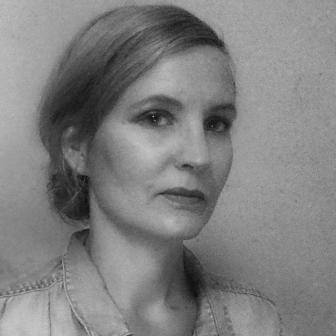 (Sweden, 1975)
Biography
One of Sweden’s most respected and celebrated contemporary conceptual poets, Ida Börjel is regarded as a vital critical presence in the Swedish literary and cultural landscape. Born in 1975 in the southern Swedish university city of Lund, Börjel has dedicated her practice to the potential for poetry to serve as instrument of historical and political inquiry, disruption, and illumination.
The wrench is the tool most closely aligned with much of Börjel’s work, where her use of language both disassembles and repairs in an effort to hobble and silence the machine. As she writes in ‘Tools’, from Miximum Ca’Canny The Sabotage Manuals,

Börjel’s 2004 debut, Sond/Probe, received both Katapultpriset, The Swedish Writers’ Union award for best debut, as well as Borås Tidning’s prize for best debut. Her subsequent book, Skåneradio/Radio Skane, published in 2006, echoes call-ins to a regional radio station in order to reveal local citizens’ sadnesses, sense of isolation, and growing disenfranchisement. The book is lyrically prophetic in its spare depiction of the granular seeds of nativism, xenophobia, and political discontent.

Oriented by a fierce commitment to the investigative research process, each of Börjel’s projects takes its shape in relation to rigorous explorations of literary and political histories which can frame, and re-frame, language as instrument. Nothing is sacred, as evidenced by her continuous re-staging and deconstruction of her 2013 project Miximum Ca’Canny The Sabotage Manuals. Drawing on an 1916 handbook published by the Industrial Workers of the World, The Sabotage Manuals merges the political and the lyrical as the thesis or distillation of the injuries of capitalism, and possible repairs – individual and collective – afforded by small and large acts  of sabotage.

Ma, Börjel’s book-length poem, was in 2014 nominated for Sweden’s most prestigious literary award, the August Prize. A response to Inger Christensen’s seminal Alphabet, published in 1981, Ma voices events and experiences unfolding in the underwater shadows and nuclear light of the Anthropocene age. Less a curative than a testimonial, Ma speaks simultaneously for the one and the many, the solitary mother and the protesting multitude,

Ma  in the mould the matrix
in the mother animal mother tree
butterflies were, heavy water
firewater was    anima
I turn around

the majority of gun deaths in the U.S.

mountain ranges were, the mountains’ quiet