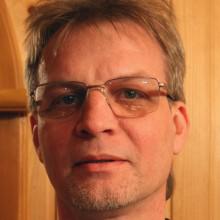 (Russian Federation, 1968)
Biography
Andrei Sen-Senkov (Andrei Senkov, Kansay) went to medical school in Dushanbe, Tajikistan. After the Tajikistani Civil War, he established himself in Russia. As a doctor he specialized in many subjects, one being acupuncture. He currently works as an echographer. As a poet he remains elusive to categorization as well: besides regular poetry books and performances, he readily employs drawings and video art. After his first book of poetry appeared in 1992, he has never ceased renewing his poetic idiom, which has made him into a favorite of younger generations and older, more conservative audiences alike, the latter no longer referring to him as a poet who 'merely clings to the latest fashion'. Ask any connoisseur of contemporary Russian poetry about the relevant poets writing today, and they will drop his name.

Sen-Senkov is far from an 'angry young man': frustration and isolation are foreign to him. His work, neither hermetic nor accessible, is not a fenced theme park, but rather a benign hurricane, feeding on a vast array of subjects. All elements of reality, whether small or large, are turned into building blocks and enter into unorthodox relations with each other. When he makes it snow in his poetry, don't be surprised if, seen under a magnifying glass, a snowflake turns out to be a parachutist. Or the rain's little milk tooth, as not a single moment is the same.

God, too, makes an appearance. But just as everybody else he can be a player, or be played with in a game of interactions:

Realia, even more so in the case of controversial phenomena or facts, are far from assumptions for Sen-Senkov, they leave their ground without having to become fixed again. The title of a poem, often an elaborate metaphor, can continue in a way that seems isolated from it, or diametrically opposed to it. Part one of ‘Two portraits of a bald woman, dated (approximately) early 1920s’ for example opens as follows:

the ends of her luscious, full, eternally long hair
catch fire in the sun
like ginger matches of curved lines
(if you’d touch them now, they’d really be warmer
than other regions of hair)

First comes the image, then comes the idea: is the tuft of hair the opposite, the utopia or the dystopia of the bald woman from the title, or simply a phase and do the curved lines represent the logarithms of time travels? In any case, not a single thing in Sen-Senkov's poems is arbitrary:

Had he written: a ball of rye bread ice, the visual resemblance would have been clear. Many readers can figure out that a sunset indeed brings a wave of chilliness with it. But Sen-Senkov leaves it to the reader to find a code to crack open the poem, following the maxim formulated by Osip Mandelstam's, one of his favorite poets, who ordered the aspiring poet to omit all crucial connections: if the reader fails to fill them in, the poet has failed to do his job properly.

Sen-Senkov's models aren't necessarily only poets. He collaborates with visual artists, finds inspiration in the work of filmmakers such as Greenaway, Rybczyński and Svankmajer, and in minimalism, bepop and world music. It shouldn't be a coincidence then that a new generation of Russian composers and scientists has embraced his poetry. Maybe it's more evident to them than to people in literature that these poems are pliant formulas sparking a dialog with the reader, and that Sen-Senkov in fact works towards the emancipation of poetry.

GENESIS. AROUND THE EIGHTH CHAPTER

A BORDER CROSSING AS LONG AS ALZHEIMER’S

BREAKFAST BEFORE BATHING THE RED HORSE

THE PACIFIC OCEAN IS ONE BIG TEAR