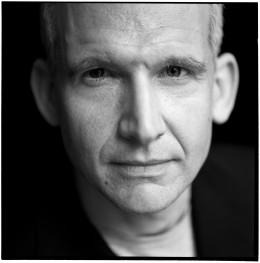 (The Netherlands, 1961)
© Roger Cremers, Hollandse Hoogte
Biography
One ought to be able to say of a poem: it begins well but by line seven it becomes a false claim – according to Nachoem M. Wijnberg, one of the Netherlands’ preeminent living poets. He also once said that a child of twelve could understand his poems. Correspondingly, in his phrasing, he seeks clarity and validity. Perhaps this evokes ideas of simplicity and straightforwardness, but that is not the case: opinions are seldom as diverse as those concerning this oeuvre. The vast majority of poetry lovers agree that Wijnberg writes brilliant, powerful poems, but what are they actually about?

Some readers refuse to believe that Wijnberg’s poems contain a ‘deeper’ significance, and enjoy the directly apparent as much as possible. They praise the simplicity, tragedy and beauty of the situations he sketches. They applaud his lack of metaphor. Others put his work through a post-modern filter and maintain that Wijnberg questions language, reason, and unambiguousness.

Yet others refer to the poets Jewish roots and point to traces of the Talmud. Or they perceive references to the Holocaust in unsuspected corners of the oeuvre. Others again wish to regard him purely as a ‘classical’ poet who creates his own visual imagery: averse to trains of thought and artistic movements but full of respect for tradition.

If it were not such a cliché, one might say: a Wijnberg poem captures the reader instantly but does not reveal itself easily. However, this cliché is not truly applicable: Wijnberg’s poems expose themselves immediately, it is only during re-reading that they appear to comprise unexpected aspects. One of the great issues in this oeuvre is probably: what is worthwhile? This question fragments into all kinds of other questions. Where to sleep? What to sing? What to buy? What should you spend time on? Where should you travel? How should you act? Et cetera.

Wijnberg does not suffer from lack of recognition. His debut De simulatie van de schepping (The Simulation of Creation, 1989) was nominated for the Buddingh’ Prize, the most important prize for Dutch-language debut collections. He has won several other awards including, in 2009, for his collection Het leven van (The Life of), the VSB Poetry Prize, the greatest honour a Dutch-language poetry collection can receive.

Several poems from his collection Liedjes (Songs) have been translated for this issue of PIW. A poem from his previous compilation Eerst dit dan dat (First This Then That) has also been included.

Nachoem Wijnberg’s collection ‘Van groot belang’, which constitutes the pinnacle of his individualistic oeuvre to date, is a painfully consistent and uncomfortably accurate analysis of power, economic and social structures and mechanisms which are at the root of the degenerate world in which we wake up each morning. In a highly individual poetic jargon, so bright that it causes confusion, he demonstrates the logic of the illogical and pares the illogical away from the logical. As a disturbing investigative report into the thoughts and deeds of people amongst other people, this collection is a credit to its title.

Wijnberg’s poems have also been translated into Farsi and German.

In Dutch:
Liedjes on the Atlas contact website
Wijnberg at the  Koninklijke Bibliotheek (Dutch Royal Library, The Hague)

WHEN SOMEONE ASKED SHOTETSU THIS, HE ANSWERED THUS SONG EXACTLY THAT MUCH De politiek in REVOLUTION

WHEN SOMEONE ASKED SHOTETSU THIS, HE ANSWERED THUS

Another one to do again, about cultural Zionism