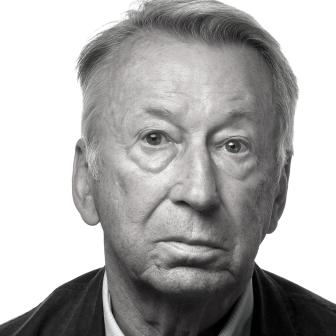 (Belgium, 1936)
© Pieter van der Meer / Tineke de Lange
Biography
Roland Jooris was the director of the Roger Raveelmuseum in Machelen-aan-de-Leie until 2005. Roger Raveel himself was a painter and sculptor, a profession that Jooris has followed with keen interest and empathy throughout his career. In his poetic work too Jooris has often turned to the world of the arts for inspiration. One of his earliest poems was about Paul Klee. He has also written poems about the artists Constant Permeke, Giorgio Morandi, Raoul de Keyser, Robert Morris, Richard Long and, of course, Raveel himself. He has also written about composers and musicians such as Anton Webern, Charlie Parker and Erik Satie.
The fact that language, unlike music and the visual arts, automatically has meaning, would appear to be a problematic issue for Jooris, and one that he has increasingly attempted to come to terms with. It is with good reason, for instance, that the poem just mentioned, ‘Klee’, opens with the lines:

To live with Paul Klee
like a secret colour, and to say
nothing more.

Roland Jooris was born in 1936 in Wetteren in Flanders and published his first book of poems, Gitaar (Guitar), when he was twenty. For his selected poems, Gedichten 1958-78 (Poems 1958-78), he was awarded the Jan Campert Prize. He was also awarded the Prize of the Flemish Provinces and the thrice-yearly prize for poetry of the Flemish Community. The collection Als het dichtklapt (As it closes) was nominated for the VSB Poetry Prize. He added the collection Kromte (Crookedity) to his comparatively modest body of work in 2012. Besides his activities as a poet and curator, Jooris has written essays and has often collaborated with artists to produce limited-edition bibliophile books.

In 1978 Jooris produced an interim ‘selected poems’, Gedichten 1958-78, which was later awarded a number of prizes. A striking feature of this selection is that hardly any of the poems from his earlier collections are included. This was probably because Jooris’s style gradually changed. The early poems often have a light tone; people play football in them, or else someone downs a beer or a bird flutters decoratively past. Art and nature often merge or are fused. What appealed to Jooris then was the ephemeral and the potential of poetry to draw attention to something that normally passes barely heeded:

Almost nothing
to look at
and that’s just
what I look at.

Jooris has virtually always been a poet of few words, but apparently fewer still is an option for him, and his new work is ever more sober. This evolution in his work continues, with his poems becoming even shorter and the blank space on the pages claiming a more prominent role as time passes. In De contouren van het verstrijken (The contours ov Vanishing) – Jooris’s penultimate volume – the lines sometimes comprise just one word. Jooris writes as a sculptor works, with every blow being well-aimed and deliberate; the unwritten page and silence are as precious as marble. The poet is unfailingly aware of this and he doesn’t cut away at random:

This would seem to be poetry that is there despite itself. By taking action and by revealing himself, the poet is a destructive force rather than a creative one. ‘Muzzles’, ‘stuffing’ and ‘heedlessly’ – these are all words with a negative connotation, while they refer specifically to the work of the poet. On the other hand a subtle play with sounds asserts itself in the same words and this would seem to be the all-embracing factor in Jooris’s poetry. Drifting in the spacious white of the page, the words would seem to have gone hopelessly astray, but for the fine musicality of the whole that binds them.

Gradually the light nonchalant tone in Jooris’s poetry disappears and it becomes more severe. The world moves increasingly out of the frame; more and more frequently the poems are about poetry itself. The demanding process of writing poetry, for that matter, was once expressed by Jooris in sharp terms in the poem ‘Schrijven’ (Writing):

Getting rid of,
writing is
getting rid of.
© Mischa Andriessen (Translated by Donald Gardner)
Selected Bibliography