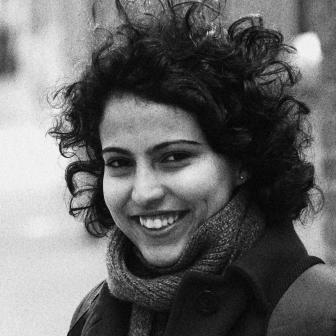 (Kuwait, 1987)
Biography
Based in the United States, Mona Kareem (Kuwait, 1987) is a poet, translator, and scholar. She has published three poetry collections in Arabic – Naharaat maghsūla bi Ma-e el ’atash (2002), Ghiyab bi asabi’ mabthūra (2004), and Ma anamū min adjlihi el yaum (2016) – two translations into English, including Ashraf Fayadh’s Instructions Within, and many essays and articles. She has a PhD in Comparative Literature from State University of New York, Binghamton, where she has also taught, as she has at Rutgers University and the City University of New York.


Kareem creates captivating and visual miniatures of day-to-day situations. Her work is characterized by its simple language. Her short lines rise above place and language, as is evident in the poem ‘Dying like a Statue’: “You sit in a plane, surrounded by black soldiers / sleeping and dreaming of Iraqis they had to kill.” And, later on in the poem: “You know: / that your heart beats alone, / […] / that no promises can be saved after crossing the ocean.”

Kareem’s work tackles the fluid identity typical of artists whose roots are not in the place where they live and work. For these artists, identity is a concept subject to change and active transformation. As she writes: “I want to change my soul like I change my clothes / […]
Simply, / I want to walk in a demonstration against myself.” It is worth noting here that Kareem is Bedoon, or stateless.

Kareem subjects herself to a critical analysis, questioning her very being. The closing poem of her latest collection is called “Mona Kareem” and ends with these lines: “Where has Mona Kareem gone / in the bustle of friends / she has fled to / it seems she went to find herself.” Her critical approach is paired with a feminist perspective on the world around her. In “Kumari”, she speaks to a domestic worker in one of the Gulf states: “You might have to help the son / discover his sexual desires, / Or even sacrifice / for the father’s bodily failures. / In both cases, do not run to the police station, / From there all fathers and sons come.”

Mona Kareem is a versatile writer who is constantly rediscovering herself, as she said in an interview with Al-Hayat: “Poetry is a way to explore and understand yourself and the world around you.”

EULOGIES FOR FUTURES TO COME

The room of darkness

Who hide their eyes