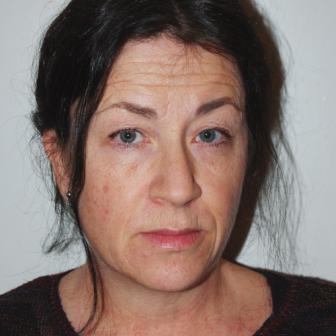 (Sweden, 1955)
Biography
Ann Jäderlund connects her poetry to other texts and art forms to a large extent. She uses fragments from European literature, such as ‘you died today or was it yesterday’, an echo of the opening sentence from Albert Camus’s The Stranger. Her poetry leans on psychological and philosophical concepts (for example by Freud or Hume) and she attempts to capture the slow language of Iranian films in words. She reworks poetic images from religious texts like the Bible and the Vedas, is inspired by the visual arts, plays with verses from pop songs and expresses astonishment at newspaper articles. Her intertextual approach is embedded in a broad cultural context, but she also shows herself to be an exponent of Swedish politically-engaged literature.

Her poetic method consists of creating a kind of chaos through various alienation techniques. Jäderlund twists old texts, stacks up baroque images and incomprehensible statements, naively concretises abstract entities, and combines different semantic fields: ‘tins powder the heaven pink’. She creates neologisms and uses a syntax that sometimes borders on the ungrammatical. The result is a ‘strange combination of simplicity and complexity’ according to poet and critic Anna Hallberg.

This simplicity and complexity arises from an increasingly pessimistic view of mankind and society and a strong sense of death and impermanence. The poems pose questions about good and evil, ‘Why aren’t we in paradise?’ and investigate possibilities to resolve desperate situations:
One can change
place. But
no-one does it. Even
the atoms can change their
places with each other. And
everything itself.

But there is no other solution than despair, cloaked in wry humour:


The beheaded got their
heads and souls back. And those who had chopped each other’s
hands off had got them back. And the devil who had tricked them
was burned on a stick. And he who had not been
recorded in the book of life was now forever. Recorded in it.
© Lisette Keustermans (Translated by Michele Hutchison)

Virgin forest with a row of figures. Testimony’s tent. I look at a leaf and attach my hope Turning myself easily. It is not enclosed. WHY ARE WE NOT IN PARADISE? When life passes away. Each heavily

Virgin forest with a row of figures. Testimony’s tent.

I look at a leaf and attach my hope

Turning myself easily. It is not enclosed.

WHY ARE WE NOT IN PARADISE?

When life passes away. Each heavily

And the sea gave back the dead. Those who had been thrown into it. But

That which is in the water. But is not

That is all the thoughts of the heads. When one

Everything there is alike. One