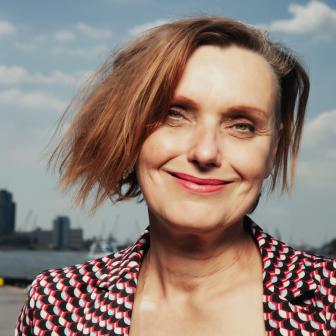 “Miracles hang slack with laughter off the table, not even properly unfolded.” (‘Meaning’ from Spamfighter, 2007)

Anne Vegter is a very versatile poet and writer. In 1989 she made her debut with the children’s book The Lady and the Rhinoceros, which was promptly awarded the Woutertje Pieterse Prize, an important prize for new Dutch literature for children.

‘Tumultuous work, in which the chaos can scarcely be tamed and much is possible that would not work in more concentrated poetry. Vegter’s later books make it evident that the poetic principle of free and idiosyncratic use of language forms the basis of everything she writes.’
T. van Deel in Trouw

‘Humour is never far away and the energetic will to live is the ultimate answer to all the reflective questions we pose ourselves in relation to the transience of everything.'
Jan Pollet

‘Vegter writes daring, personal poetry that sometimes teases language to the limit. One time her poems may consist of complex chess configurations, whereas at other times the poet can be trite, incoherent or even vulgar. It all contributes to the stimulating, grating feeling that someone is getting too close to you.’
Ron Rijghard in NRC Handelsblad
Ever since her very first poetry collection, Het veerde (It Sprang; 1991), Anne Vegter’s style has been characterised as ‘springy’. This was not her first book – it was preceded by the children’s books De dame en de neushoorn (The Lady and the Rhinoceros; 1989) and Verse bekken (Fresh Mouths; 1990), which were also written in a noticeably free and lively style. Anne Vegter writes whimsical poetry that has often been called surrealistic and dreamlike, disturbing and puzzling in equal measure.  All of these qualifications are made in a positive sense, however. Some critics find the mystery and unpredictability of Vegter’s poetry too much, but most praise the sense of adventure and surprise that accompany it.

What people rarely comment on is that the way Anne Vegter formulates and structures her poetry (and her theatre work and children’s books) reveals habitual ways of thinking, i.e. the way we think while we’re busy doing everyday things, like doing the dishes, shopping for groceries, working out at the gym, travelling or having dinner. These casual acts of thought are not expressed literally, because Vegter is a poet and knows exactly how to stylize her sentences and add dramatic accents. However elaborate and laden the sentences might be, the incongruous thoughts always remain recognizable.

Not only is this ‘thinking aloud’ quirky and playful, but in almost all of her poems it leads to concise statements about life. These statements show the impossibility of making definite remarks about the important facts of life, because understanding these facts is beyond us: how should I live, how do I react to others, where will I find love, what hurts us and gives us pleasure, am I alone or not?
“I was really thinking of four situations, preferably painful ones of course
or local discomforts as well as: how she did that.”
(Translated by the poet in ‘Local discomforts’, from Aandelen en obligaties, 2002)

“Just past the gate we kept a close eye on each other
but every one stayed silent, as the dead tend to.”
(‘Moratorium’ from Spamfighter, 2007)

“If the coordinates at which you find yourself are mutable,
try to travel less capriciously.”
(‘Alternating Positions’ from Spamfighter, 2007)
These are all aspects of the question of how we can live in the face of certain unresolved questions, as Dutch poet and critic Ilja Leonard Pfeijffer wrote in response to Vegter’s collection Spamfighter. Whatever a poet does with these questions, few will have the courage to write about them so plainly and directly. Many of these questions are painful, incomprehensible, but they demand to be contested (and sometimes to be cherished), and Anne Vegter makes this unequivocally clear. She shows herself to be a courageous and vulnerable poet: courageous because she chooses to write poems that are not merely neat, tidy and decorative, and vulnerable because the directness of her language can be dismissed as banal. Everything she writes can be viewed as a confessional statement from Anne Vegter the person, rather than as words and sentences chosen by Anne Vegter the poet.

When Vegter ends her poem ‘Meten & wegen’ (Hit & Miss; from Eiland berg gletsjer) with the sentence “Readers look for someone to take a breather in”, she shows that she is aware of these two roles, and of how readers of poetry might react to this double position. With her (or Anne Vegter) readers are probably always looking in the wrong place, wrote Piet Gerbrandy in response to that sentence, because Anne Vegter (or she) is a poet who prefers to rudely awaken the reader than to encourage rest. However true that may be, everything evoked by shaking the reader holds true, and though it doesn’t help the reader to find rest, it gives us a poetic truth on the basis of which we can move forward every day anew. "Yesterday someone said either it fits or kiss it goodbye," wrote Anne Vegter in the same poem. And that’s exactly how it is.
© Jan Baeke (Translated by Megen Molé and Thomas Möhlmann)


Vegter in translation
Anne Vegter’s poems have been published in anthologies in English, French and Spanish so far. She has been invited to perform on several international stages, including the festivals of Rotterdam, Dublin, Buenos Aires and Medellin.

In Spanish:
Some poems by Vegter in Spanish translation

Anne Vegter was Poet laureate of the Netherlands (Dichter des Vaderlands) from 2013 - 2017.  The poems she wrote in this period were published in Wat helpt is een wonder (2017) and are also available on the Dichter des vaderlands website.

UNDER A FAITHFUL SKY

I was really thinking of four situations