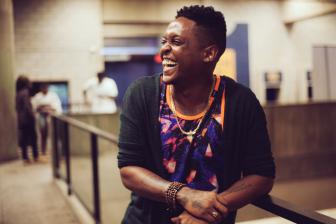 (United States of America, 0)
© Danez Smith
Biography
Danez Smith was born in St. Paul, Minnesota. They are the author of Don't Call Us Dead (2017), [insert] boy (2014), winner of the Lambda Literary Award and the Kate Tufts Discovery Award, as well as two chapbooks.
Of Smith’s first book, Jericho Brown writes, “The poems of [insert] boy have need of the body – desire it and lament its mortality – but over and again they assert Smith’s seemingly religious belief that every sound the body makes, every word and wail, is only possible through connection to some other plane of existence.”

In an interview with Rigoberto Gonzalez for the National Book Critics Circle blog, Smith said:

What we mark as 'taboo' is reality for many, so the necessity to write what I know to be normal and what is queered by the world lies in the urge to normalize these stories of complicated desires and sex work. I’ve never been one for assimilation, it gives me the creeps, so I’m giving these experiences over to the page to expand the world until it can more adequately accommodate me.

Mary Austin Speaker called Smith’s chapbook Black Movie, “a cinematic tour-de-force that lets poetry vie with film for the honor of which medium can most effectively articulate the experience of Black America.”

his dreams possible, pulsing, & right there.
– from ‘Dinosaurs in the Hood’

Smith is a founding member of the multigenre, multicultural Dark Noise Collective.  In 2011, Smith was an Individual World Poetry Slam finalist, and in 2014,  the festival director for the Brave New Voices International Youth Poetry Slam. They are the recipient of fellowships from the McKnight Foundation, Cave Canem, Voices of Our Nation (VONA), the National Endowment for the Arts, the Poetry Foundation, and  elsewhere.

BARE WAITING ON YOU TO DIE SO I CAN BE MYSELF alternate names for black boys DEAR WHITE AMERICA FROM SUMMER, SOMEWHERE

Waiting for you to die so I can be myself

It won\'t be a bullet

What was said on the bus stop

Dinosaurs in the hood

The fat one, with the switch