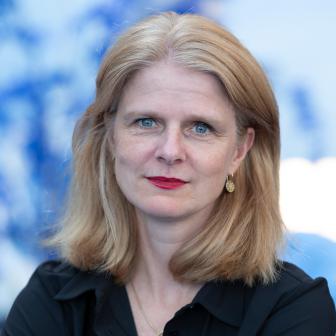 Sasja Janssen is a poet and author of novels and short stories. The body features in her poetry in many forms, from vehicle to target, and from weapon to wound. Her ability to make her often physical fascinations tangible unparalleled, as she condenses them into something that nestles in the body like a secret. After the success of her collections Ik trek mijn species aan (Putting On My Species, 2014, nominated for the VSB Poetry Prize) and Happy (2017), she is now causing a stir with Virgula (2021), for which she received the Awater Poetry Prize and has received nominations for the Ida Gerhardt Poetry Prize and this year's Herman de Coninck Prize and De Grote Poëzieprijs (Grand Poetry Prize) for best poetry collection of the year. This collection strikes an impressive balance between mystery and razor-sharp intent, with Janssen’s use of the comma (virgula in Latin) constantly causing shifts and contrasts in perspective. The boldness of this small intervention turns a little glitch into the tissue that connects interpretation and confusion; a tiny stumble in the ceaseless flow of life.

A poet, novelist and short story writer, Sasja Janssen made her literary debut in 1999 with the publication of an excerpt from De brieven (The letter), a novella, in De Revisor. Her novel De kamerling (The eunuch) was published by Querido in 2001, followed by Teresa zegt (Teresa says) in 2005. From 2006 she primarily has written poetry, which has been published in the collections Papaver (2007); Wie wij schuilen (Whom we shield; 2010), nominated for the Jo Peter Poetry Prize; and Ik trek mijn species aan (I put on my species; 2014), nominated for the VSB Poetry Prize. In addition to poetry, Janssen writes novels and stories. She is also a teacher of Dutch as a second language, and teaches writing at the Schrijversvakschool and at the student organization Crea. She performs at festivals in the Netherlands and abroad.

Janssen’s collection Ik trek mijn species aan (Putting On My Species) opens with an epigraph borrowed from W. F. Hermans, taken from Nooit meer slapen (Beyond sleep): ‘that I am always and in everything as defenseless, powerless and replaceable as an atom’. If ‘the I’ means so little, it is imaginable to prefer ‘the species’ instead. This is what Janssen does, but in an idiosyncratic, individual manner. Janssen bypasses the I by giving a voice to the undefined origin of life and by endowing omnipresent sexuality with an all-but-independent presence; but nonetheless, and precisely for this reason, the reader is constantly confronted by the concept of ‘I’ and the ‘I’ of the poet as the creator of her poetry. ‘I then pulled off my species, to see if I was empty / to see if I dared it, the bloodlessness I dared. / The others glared at how I was, that nothing of me / remained, must there be something remaining of me or so?’ This poem from the title sequence is a sharp and sobering commentary on the truism that the poet expresses herself in her poetry, and that readers sit in search of the poet, of the flesh and blood person that the poet is.

Within this context Rutger Cornets de Groot notes that Janssen retrieves in modern form something ‘of the outdated concept of “personality”, which was once a criterion for literature’s worth. It had been the capacity of the author to unify opposites within himself, to be not just who he was, but who he was not, who he could become. The poet aligns with not just who he is but incorporates whom he doesn’t renounce’. As Janssen writes in the first poem of the cycle ‘Because I must travel’: ‘I carry my boundlessness as a weapon / my blood against fevers and joint pain / countless maps so that I know where I should not be’.

This collection has the force and the energy of the scriptures. The poem cycle ‘Yet it begins', in which the expansion of mankind is put into motion and the decline of earth is announced, seems to merge Genesis and the Apocalypse: ‘In the penultimate watch someone watches / and people saw stiff heavens, monkey nights from phermones / hell loose in the halls / speckles falling from birds, quarks became heavy so heavy / milk dripped from the balconies, girls danced in breasts, dancing / dervishes alike, just to name a few, someone gives no more names’.

Try to maintain 'the I' and find a new coherence in this disintegrating reality! One medium to do so might be language. ‘We love to talk our bones together’, states Janssen in the third poem from ‘Yet it begins’; but in the closing poem, the value of this comes into question: ‘Shhhh, talk is fodder for folly.’

To sing in so many words the relativity of words, and to turn this into penetrating poetry, is an art in and of itself. ‘Just used words until today, but were forced / to stop that, the windows steaming up with our yeast // through the grabbling, the falling, the tender, the nauseous / the sweet, the fleshly, the bluish dangling round each other’s neck. // We have sung ourselves. We have ourselves for the very first time’ (trans. Willem Groenewegen).

Ik trek mijn species aan was nominated for the 2015 VSB Poetry Prize, with the jury declaring it a ‘challenging, haunting collection’: ‘In a fabulously real play between beginning and end and everything in between, sorts of people are born that thereafter try to survive. Maybe sexuality is the only thing to hold onto, or in any case an approximation of identity. Without the generic noun ‘woman,’ there is nothing to be done’.

"Virgula, the iron beneath the mattress bounces"

"Virgula, when the hours fall through the ceiling"

"Virgula, the night I was impregnated"

THE BALLAD OF THE HOME HELP 1

I PUT ON MY SPECIES

"Only I have a cunt"