Presenting the nominees of the 2015 VSB Poetry Prize 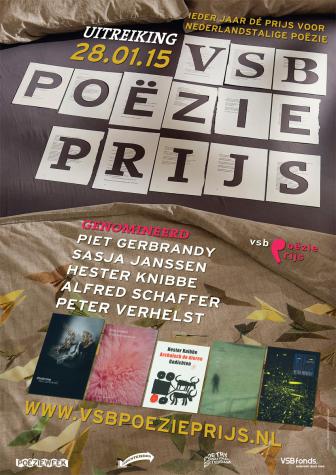 November 17, 2014
Among the highlights of Poetry International's regular activities is organizing and presenting the VSB Poetry Prize, which is awarded to the best Dutch-language collection published in the previous year. In addition to planning a number of local events around the prize, we have created or updated the nominated poets' profiles in our web archive and commissioned a selection of English-language translations from their collections.
This year's eclectic group of nominees currently reside in The Netherlands, Belgium and South Africa, and include a classicist, several novelists and even a writer that, years ago, pronounced his own poetic death.

Vlinderslag (Butterfly stroke) by Piet Gerbrandy (Atlas Contact)
The jury writes: ‘This is the apex in the oeuvre of a writer known for poetry that is totally unique, frank and sensual, while also very classical. Gerbrandy wrests language, in alternating prose and verse poems, to suit him and melts it, with destructive daring, to what he wants, so that he creates a world that is both commonplace and absurd. . . Each poem is fresh and unfathomable’.

Ik trek mijn species aan (I put on my species) by Sasja Janssen (Querido)
The jury writes: ‘In this challenging, haunting collection, Sasja Janssen has the “Enough I poetry”. In a fabulously real play between beginning and end and everything in between, sorts of people are born that thereafter try to survive. Maybe sexuality is the only thing to hold onto, or in any case an approximation of identity. Without the generic noun ‘woman,’ there is nothing to be done. And still then: “I can’t handle it, that business about life and death.’ The sentences in I put on my species tickle, tease, make you laugh and reflect in a perfectly strung corset of words.’

Archaïsch de dieren (Archaic the animals) by Hester Knibbe (De Arbeiderpers)
The jury writes: ‘Despite the title, Hester Knibbe in this volume turns to humans and to everything that makes us human: love, doubt, fear and the desire to know who drove us from paradise . . . references to current events take on an existential charge in the context of Classical and Biblical references. With Knibbe, this is never coquettish but always functional. The mythical history gives sense to the human struggle with fear and shame.’

Mens Dier Ding (Man Animal Thing) by Alfred Schaffer (De Bezige Bij)
The jury writes: ‘This voluminous collection is a venture in more ways than one. It is a cross between a novel, a biography and a poetic autobiography. Through a clever collage of types of text, Schaffer brings to life the old Zulu warrior Shaka . . . This volume insistently examines phenomena such as “power”, “violence”, “lust” and “myth”. Schaffer shows that the boundaries between man, animal and thing, as well as between literary genres, are often thin.’

Wij totale vlam (We total flame) by Peter Verhelst (Prometheus)
The jury writes: ‘In his rich, spiritual collection, Peter Verhelst explores love, but also separation and destruction. On this journey with the beloved, he lets “all corners of any meaning” dance, like the fireflies on the book's cover. When words fail him, he scatters “. . .” around like imagined confetti . . . Verhelst proves anew his rare talent to let the Dutch language sing.’

Throughout January, the nominees will travel to several major Dutch and Belgium cities to give a series of readings. Detailed information about their schedule can be found on the VSB Poetry Prize website.

The official award ceremony will take place on 28 January 2015, the eve of Poetry Week, at Rotterdam's Kunsthal. The winner will receive a monetary award of €25,000, a glass sculpture and an invitation to read at this year's Poetry International Festival.
Translator: Mia You