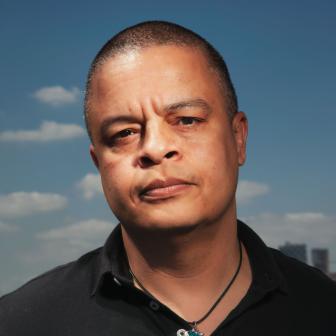 One of the most talented poets of his generation writing in Dutch, Alfred Schaffer debuted in 2000 with the collection Zijn opkomst in de voorstad (His Rise in the Suburbs). His second book, Dwaalgasten (Vagrants; 2002) was nominated for the VSB prize. After that came Geen hand voor ogen (No Hands Before Your Eyes), Schuim (Foam; 2006) and Kooi (Cage; 2008), Mens dier ding (2014) en Postuum. Een lofzang (2016). After winning the Jo Peters poetry prize for his first collection, he was nominated for the C.Buddingh prize and went on to win the Hugues C. Pernath prize, the Ida Gerhardt poetry prize and the Jan Campert prize.

Alfred Schaffer has been awarded the Herman de Coninckprijs for his collection Wie was ik, strafregels and the prestigious P.C. Hooft Prize 2021 for his poetry oeuvre.

Alfred Schaffer grew up in The Hague, the son of a Limburger and an Aruban. In 1996, he moved to Cape Town, South Africa to continue his studies and met his future wife. He returned to the Netherlands in 2005 and worked as an editor in Dutch publishing before moving back to South Africa in 2011. He currently works as a lecturer at Stellenbosch University.

In 2014, Schaffer’s poetry collection, Mens Dier Ding (Man Animal Thing) was published and met with instant acclaim, going on to receive a VSB Poetry Prize nomination. ‘This book is a real happening in poetry… a masterpiece’, wrote the NRC Handelsblad. And in Trouw: ‘Schaffer shows what kind of animal things a man is capable of and how little human lives are sometimes worth. He does this with humour, with schwung, tenderly and thoughtfully; in poetry in which bloodlust can look like a ‘massive bar of dark chocolate’ . . . Man Animal Thing grabs you by the throat, not a common occurrence with poetry’.

Partly inspired by Chaka, a famous South African novel from 1931, written by Thomas Mofolo, the book charts the imaginary progress of the nineteenth-century statesman and tyrant, Shaka Zulu (1787-1828). Structured around a series of daydreams and major events in Zulu’s life, the poet extracts Zulu from the historical past and moves him to the modern media age where speed dating, UFOs and effervescent painkillers are the norm. The collection is hugely diverse, from lyrical poetry to tweets – to wit: ‘SHAKA’S COURT CASE LIVE FROM NEWS24’:

7:20 A closely-guarded Shaka Zulu hurries through the Court’s back entrance.
7:41 The row of journalists at the main entrance twists and turns like a spastic snake.
8:13 @SimonsH06. Made it! We’re on the fourth row! S. crumpled up next to his mother on the front row. #Shakasmum

Schaffer’s poetry has shifted from linguistic experimentation, unsettling observations in a sober business-like tone and reflections on life’s incoherence to a more mature, overarching vision in which formal and conceptual experiment goes hand in hand with lucid, lyrical texts. His early promise has been more than realised.

You haven’t said a word yet