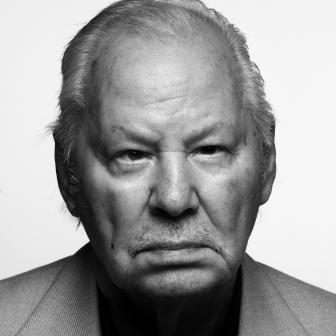 (The Netherlands, 1929 - 2018)
© Pieter Vandermeer
Biography
Armando has been publishing poetry since 1954. His Collected Poems were published in a considerable volume in 1999 and one might have thought that this part of his varied and versatile oeuvre was complete. After ten years of poetic silence, however, he has published a new collection, Gedichten 2009 (Poems 2009). Although he has received many honours and awards as an artist, including royal distinctions, his poetry had for a long time received little recognition. In January 2011, however, he was awarded the VSB poetry prize for Gedichten 2009. Recently too, he published a bibliophile edition of his prose book De stilte (The Silence) and the poetry collection Ze kwamen (They Came).
Although his eleven volumes of verse are cyclical and narrative, Armando is by no means an accessible poet. His subject matter is weighty, dealing as it does, without exception, with violence, especially that of war, of the relation between victim and perpetrator, of guilt and punishment and of nature’s merciless struggle to survive. For ‘nature’ too is always violent for this poet. In Ze kwamen, ‘growth’, like the ‘agricultural cycle’, is synonymous with ‘destruction’: “Like a mournful stalk with / green blood, / that in a transparent guise / starts scourging the land: / the same stalk.” (from ‘Growth’ in Ze kwamen)

Armando deploys a severe idiom in his literary work, one that can be thought of as a private code, and he continually draws on the same vocabulary, excluding other words. The protagonist is also unchanged – he is the same anonymous, lonesome warrior, who is victim and executioner at once: “he, who is his master and who dwells within himself knows / who will be one: victim and perpetrator” (from ‘The thinking, thinking dead’ in Herinneringen (Memories), 1973). ‘Guilt’ is the key theme that unites the other themes in his work. Armando’s poetry should be read as a futile attempt, in a struggle with this notion, to abolish the contradictions contained in these themes.

The foundations of Armando’s work were shaped by his experiences in the Second World War. This war is a theme that is universal in character – take for instance these lines from ‘They have started the work the work’ from De naam in een kamer (The name in a room) in his Collected Poems:

He also refers to biblical and mythological texts about guilt and punishment. The ‘I’ figure, for instance, in ‘The hand and the voice’ wonders, “am I my brother’s hand?”

The poetry that Armando wrote in the 1960s forms a break with the rest of his work. The subject matter in ready-mades such as this one from ‘The agricultural cycle’ remains the same: “with teeth of steel. / the roots of the crops sown are not harmed. / the weeds are killed in the bud. / with teeth of steel. // the effect of ‘beautiful land’ must be amazing.”

Armando made his international breakthrough as an artist at the beginning of the 1980s in Berlin where he had settled in 1979. Since that time his literary work has also been positively received. From 2003 onwards he published a number of books with extremely short stories, which can also be read as prose poems.
© Trudie Favié (Translated by Donald Gardner)
Short bibliography

Note: Verzamelde gedichten (Collected Poems; 1999) contains all the poems that Armando published between 1954 and 1999. The second edition also includes poems that appeared between 1999 and 2003. Schoonheid is niet pluis. Verzameld proza comprises all the prose works that Armando, with one exception, published with the Bezige Bij between 1973 and 2003. It did not include the documentary books, De ss’ers. Nederlandse vrijwilligers in de Second World War (with Hans Sleutelaar), Geschiedenis van een Plek (with Hans Verhagen and Maud Keus) and De Boksers and Mensenpraat. Nor were the texts of Herenleed, written with Cherry Duyns for TV and theatre programmes, included.