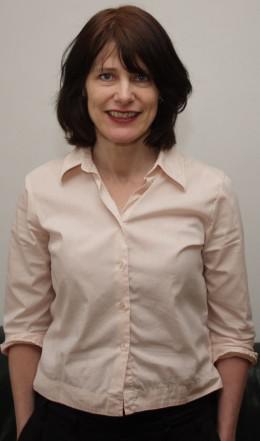 (The Netherlands, 1955)
© Bertram Westera
Biography
Astrid Lampe has written of her poetry, “With stylistic niceties and with pathos I fatten the ego of poetry lyrically and dramatically and rhetorically ically ically ically until it explodes.” And indeed, opening any of her books we encounter a poetry chock full of tones, figures and effects, of at times almost unbearable density and vivacity, a great multi-voiced jumble with the insistent physical presence of a busy metropolitan street or a computer game.
Having worked in theatre prior to becoming a poet, what Lampe writes is a poetry of voices: voices that shout, whisper, recite, chatter, sigh, sing, tweet, echo, seduce, insult, joke or think out loud, each of them all the while pretending to the status of lyrical subject and demanding our attention. She presents us with a vivid bustle of exciting rhythms, seemingly random but in fact carefully crafted to form a constant stream of narrative twists, turns of phrase and tonal and rhythmical shifts. Lampe allows the sublime and the bathetic to exist side by side: beauty and high lyrical registers may always be suddenly undercut by banalities, gasps, natural sounds, exaggerations or mindless prattle.

The world outlined by these voices as they ceaselessly interrupt one another is a fragmented one. It is formed of a motley multitude of subjects and their objects, and even though Lampe frequently employs echos and repetitions of phrases, subjects and scenery to give continuity to her texts, it never quite seems to cohere into a consistently shaped finished narrative. The field of possibility always remains open. As Lampe has put it in an interview, “Harmony is death.”

All this has made Lampe into one of the most controversial poets in contemporary Dutch literature. Praised by admirers for her vivacity and playfulness, she has also become a favourite target for conservative critics who regard her experimentation as mere postmodernist posturing and her formal capriciousness as meaningless. Of course, Lampe is not the only poet working today whose poems seem to resist conventional notions of poetic beauty and formal consistency, but her work can cause particularly strong reactions.

Undoubtedly this has much to do with the emphatic sense of physical presence that is characteristic of Lampe's work. “All my work is bodily”, as one of her poems has it. Indeed, through the powerful theatricality of Lampe’s voices, her language fragments release a libidinal potential inherent in the landscapes of our daily existence and its many objects that exert their powers of fascination over us. These may include everything from random news events, new media technology and computer games — such as Lara Croft: Tomb Raider in Lampe’s collection De memen van Lara (The Memes of Lara, 2002) — to fairy tales, toys, urban life, sex, military violence and chitchat — and poetry itself. Her insistent, sometimes exaggerated staging of these everyday concerns between the registers of the sublime and the banal is always on the point of revealing some perverse underside to our fascinations with them, and this aspect of her work may account for the sense of unease often experienced by those exposed to her poems and performances.

At the same time, Lampe allows her language fragments to follow their own logic, giving her poems a liberating energy, which can have an exhilarating effect that is at times hysterically funny. The poems often seem to follow no plan at all save for their disruptive flow. Over the course of the years, this formal liberty has increasingly led her to expand the scope of poetic form, as longer poems have started to appear, in Park Slope (2008) and Mosselman Hallo (Musselman Hello, 2006), as she has made more and more intensive use of the possibilities of typography (revealing an affinity with the tradition of Dada-related authors such as Paul van Ostaijen) and as she has started to produce poetry videos.

While Lampe’s interest in the forms and fetishes of modern life has been taken to task by more conservative critics, who interpret this aspect of her work as mere attemps at being fashionable, it would be more exact to see this aspect of her work as a sign of her interest in living experience, in life unfolding in the present moment. Lampe’s is in fact a very serious poetry that seeks to engage the world we live in in a maximal way, including its beauties, its horrors and its passing moments. As Lampe herself puts it, “In the end, the fundamental idea is a loving engagement without first having to deny the ugly and the horrible. What I do is very passionate, really. My poetry is an unconditional love poetry.”
© Samuel Vriezen
Bibliography

the man with a love of animals wants to write history

is it the conquered left-handedness