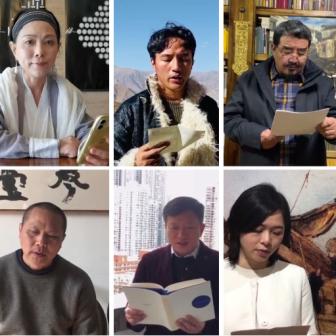 December 19, 2020
One of the biggest anxieties among Chinese poets today is personal identity, that is, a distinctive identity in a diversified society, including ethnic and linguistic identities across cultural and geographical boundaries. Poets from almost every province in China have published their own anthologies of poetry to establish a regional voice as against a central, unified poetic voice and/or style. Religion was a taboo topic until recent years, even though one could hardly avoid religion when talking about one’s ethnic background. The themes of ethnicity and religion usually run through poetry in a very subtle way, almost like underwater currents. Accompanying the anxiety is the confusion about beliefs and religious practices. Daoism and Confucianism among the hundred schools of philosophies that flourished from the 6th century to 221 BCE (the beginning of the Qin Dynasty) have been the two most influential ones, and these two religions have evolved respectively, wrestling with each other from time to time. While Hindu Buddhism in China has merged with Daoism to a certain degree, Tibetan Buddhism stands on its own. For ordinary Han people, the pre-historical mythological Gods and half-human deities are more popular, such as the Gods of creation: Pangu who created the earth and sky, yin and yang; Nuwa who created animals and humans out of dust; the Jade Emperor who controls the universe as the supreme ruler of heaven; etc., etc. Qu Yuan (c. 340–278 BC), the first great poet in China, mentioned in his poetry more than twenty Gods from The Book of Mountains and Seas, the first book in Chinese about ancient mythologies and geographies. Among the other fifty-five ethnic nationalities in China, many have their own religions and Gods/Goddesses. The following six poets represent a variety, though just a small sample, of the diversified voices from contemporary China in terms of ethnicities, religions, languages and dialects, geographical locations and poetic styles.

Cong Rong is ethnic Hui from one of the largest Chinese Muslim communities in China. She also practices Buddhism and studies Christianity. For her, religion means open-minded spirituality. She was born in Changchun, northeast China, in the 1960s, moved to Sichuan at age eight, and went to college in Shanghai and graduated from Shanghai Theater Academy. Cong Rong is also the founder and art director of "Chinese Poetry Theater" and "First Reader" in Shenzhen, south China, where she now works. She started writing poetry in the 1980s and has become one of the representative voices of the 21st century women’s poetry in China.
Cong Rong was visiting Los Angeles, USA, when the coronavirus pandemic started and spread across the ocean which delayed her return trip to China by six months. In her poetry diary, she experiments with full stops between words to show how life is being stopped during the lockdown.

sky angels. buddha. airplane pilots.
white-haired me.
homeless people holding paper bags on their heads
stand by the roadside. angels are also the
cab drivers waiting for me to cross the road.
angels. linden arrowwood you’ve planted.
angels. jasmines you’ve planted.
all the books on racial discrimination
have sold out today. in american book stores.
all. sold. out.

Translated from Chinese by Ming Di

Yungdrung Gyurmè, (Tibetan name གཡུང་དྲུང་འགྱུར་མེད།), is a young poet from the “Back Tibet” (Shigatse) as opposed to Front Tibet (Lhasa). Born in 1985, he graduated from Renmin University in Beijing with a master’s degree in philosophy and returned to Tibet where he specializes in the study of Tibetan religions. He published his first book of poetry, Slightly Closed Windows, in 2019. He speaks Tibetan and writes in Chinese with a deep concern for the Tibet of the past.

One spring in the seventeenth century
a swallow flew away, never to return
Black crows fell upon the city walls
declaring a misfortune

Twenty years ago, my father held my hand
as we stood on a street corner
in Shigatse. "Look, that’s the Samdruptse
Palace," he said.

Translated from Chinese by Ming Di and Neil Aitken

He Zhong, aka Keli Saerding Nuofu, also aka Qiongna Norbu Wangden, was born in 1964 in Yugu Autonomous County (of Gansu Province) at the foot of the Qinghan-Tibet Plateau. His father is ethnic Yugu, his mother Tibetan. He lives in Lhasa and is known as the last poet of the once well-known "Lhasa Literary Group" from the 1980s. He speaks Tibetan, Yugu, Mongolian, but writes mainly in Chinese.

– for my fellow poets, children of shepherds, creators of flying foxes and elegies, the last craftsmen of the grassland plateau: Andonima, Temur, An Jianjun, Harabqi, Qiangqiang, Huzi, and Barrs

1.
I drag the silence of the evening, a gray road winding from the fields
to a bridge with willow trees hanging over and ending in the palm
of a young boy. A hummingbird flies through the dimming light.
Flocks of sheep move slowly over from a distant sunny slope,
while I drag the silence of the dusk.
I must be whistling. Poplar leaves must be blowing the woodwind
of the evening breeze. My cousin, bald-headed Timur,
must be opening his night-bird eyes.
We will walk through the small streets after the rain and move closer
to an old castle, then we will each act as if hallucinated,
poking our noses into the dark ancient caves.

2.
For a while I like humming blue pastoral songs,
placing myself in a nomadic scene from medieval times.
I try to find courage from the soldiers returned
from the glorious expeditions.
I drag the silence of the dusk, looking for a time
when a beauty in a red turban comes to life from a legend –
I’ve been to many places, but the waves of the Ullste River,
the anecdotes of the palace, echo like a ballad – every time I stare
at the lost scene, the broad background blends in
with the dazzling feathers of those knights and the surrounding
mountains—they become the center of my personal history.

(Excerpt from a long sequence of poems)

Translated from Chinese by Ming Di and Kerry Shawn Keys

Yang Jian (b. 1967) is a poet and visual artist from Anhui province. He worked for thirteen years in a steel factory as a laborer and started writing poetry in the 1980s. He has published several collections of poetry which have been awarded prizes including the Liu Li’an Poetry Award (1995), Rou Gang Poetry Award (2000), Yu Long Poetry Award (2006), Southern China Media Award for Literature (2008), and the Luo Yihe Poetry Award (2012). He also does ink painting, an art he began to practice in 2008. He is known as a Buddhist and hermit.


Deep at night, I'm far from being born yet.
Outside, a symphony of frogs croaking,
and beyond, an emptiness – my true body.
Dewdrops on plantain leaves
drop, drop.
A barefoot girl
and her new moon –
as if there’s a desire somewhere just awakened
to tempt me into being born.
I fall into the precise and boundless void
of the universe, like a droplet of honeyed rain,
a happy flowering reed. But I won't be trapped
into my mother’s nightly wish
to give birth to me again.

Translated from Chinese by Ming Di and Kerry Shawn Keys

Meng Yifei (pseudonym of Wu Kaixiang) is ethnic Buyi, born in Guizhou province in 1975. As a poet and literary critic he has published more than thirty books of poetry and essays. He runs several poetry hotels to make a living. He is one of Guizhou's most distinctive literary voices and a representative poet of the 1970s generation in China. At present he lives in Guangzhou, southern China.


"To write is to understand fate:
my own, and mine with the world’s..."
I used to wander along the coast of Phoenicia
encountering “the drowned Phoenician sailor.
(Look, his eyes were pearls.)"
Through the pearl-eyes of the dead, I see
how Mathematics gives birth to the sky,
humans and rhetoric.
Zhuang Zhou, is it in your writings that we
can find the causal connection, the key to open the universe?
You write about religions as if they’re mythologies
which become religions of the East,
a metaphor for how we respond to absolute solitude
in the digital age. This morning
you walk out of the woods. You enter your lodgings.
You are your lodgings. Facing the streams with your back
toward the cliffs, you live in your own nature. Now
I set myself free from Tyre and Sidon,
as an irrational number, or a remainder, a left over,
the remaining fraction after all subtractions.
"In me, old age comes too early."

Translated from Chinese by Ming Di and Frank Stewart


Un Sio San is one of the most talented young poets from Macau, a recipient of the inaugural New Star – People’s Literature Prize of Poetry in China. She graduated from Beijing University and also holds a master’s degree from Toronto University. Her published poetry collections include Wonderland, Metaphysical Exile in the Peaceful Age, Evolution of Love, Here, Naked Picnic, Song of the Vagabond and Bitter Lotus Seeds plus a collection of essays titled Noisy Islands – Cultural Notes of Taiwan, Hong Kong and Macau. She reads poetry in her native tongue, Cantonese.


from motorbike to motorboat, from public bus to north-south railway
my dream advances segment by segment, more and more ruins springing up
towards the sky
people are sizing me up, calling me “girlie”, calling me “sister migrant”
they say the waterlilies on Lake Shicha are blushing into bloom
I say, buddy, in this world of rivers and lakes, who among us isn’t drifting?

I’m planted midstream on this trunk line, someone pulls on my scalp
telling me that the seedlings of the Harmonious Society need to surpass the British, catch the Americans
the melody of the flatbed cutter is ka-CHAT ka-CHAT
it cuts and tears 1.3 billion lives into
an accurate factory shift schedule

I’m an old thirteen
I make miracle bras for blonde beauties
and plastic toys for their children
every stitch of the French leather wallets I make in China
I sew from the fat days, the monotony of work

it’s a shame I’m not a gypsy, I can’t sing and dance
a horse cart carries my story, I am a Cinderella for the Li family
people will forget about me, call me “honey”, call me “Cabiria”
the way they discuss the chestnuts on the ground in their hometown
or a song that’s already out of date

Translated from Chinese by Brian Skerratt