Our bodies as archaeological sites 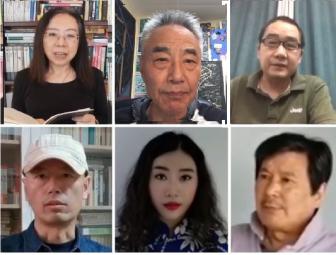 June 02, 2020
How will future beings look at our current time? Our life and ordeals? Our struggle for an ideal society of freedom and justice? Will they find our poetry in the fossils that might or might not exist hundreds of years from now? Can the remains of our bodies serve as witnesses to our time? Can Body Poetry move further in the political and social arenas of our brief existence on this enormous earth upon which we sojourn? Meng Lang’s poem “My body clashes into history”, written in May, 1989, is forever the source of inspiration for poets of his generation who experienced or witnessed or even just heard of the student movement that year in China. He dashed, with his body and soul, into that historical movement which was crushed in June, a failure that he seemed to have anticipated, a failure that he and Song Lin and many other Chinese have spent their lives mourning and appealing for redress and justice. The sadness has grown into a baby and now an adult of 31 years old named June as Bei Dao calls it in his poem "June" (not presented here this time). “[E]ven the deaths from that time have grown up— /have aged so much that even their obituaries /could have given birth to children by now” as Yan Li writes. But looking at the June tragedy in a broader perspective, there have been many similar struggles everywhere in the world continuously. There are only momentary victories. The idealists are destined to a long journey, forever looking for a brighter future. There have been so many dark moments in history when ordinary people became victims, trash, or “cannon fodder” as Jiang Xue puts it. Our bodies are the only bullets we can shoot back with, as Huang Fan fantasizes in his poem. For Yang Biwei, she would simply set on fire all the absurdities and miseries. Will poetry be there “guarding the wreckage” (to use Liu Zongxuan’s words) with us? Will Body Poetry live a longer life than bodies? Will Body Poetics 身体诗学 endure all the sufferings that bodies have gone through?
身体作为考古遗址：六诗人朗诵——隔离时期 诗在飞行 III


What do we want from
the failure that’s coming?
Brave enough,
a hand has held it up
but full of surrendering

The other besieged hands
have joined into a circle.
But I’m more reckless.
I beat the black clouds of history
with my fist!

A storm is determined to come.
Gunpowder or mercury, each has its say.
I turn into an alchemist
and draw from my shoulder holster
an imaginary pistol!
Or a thermometer.

Brutally, my body clashes into history!

Meng Lang (1961-2018), born in Shanghai as Meng Junliang, was an important member of the avant garde poetry group in Shanghai from the 1980's to the early 1990's. He was co-founder of several independent journals there.  From 1995 to 1998, he was a resident poet at Brown University in the US. He moved to Hong Kong and died of lung cancer in 2018. He is well remembered as a major experimental poet from Shanghai, China. Meng Lang's widow, poet Du Jiaqi 杜家祁, reads this poem in the video presented below.

Yan Li 严力
EVEN THE SADNESS HAS GROWN UP 悲哀也该成人了


So many years have passed,
even the deaths from that time have grown up—
have aged so much that even their obituaries
could have given birth to children by now.
Part of me remains in that year,
but even that part has grown up.
It has grown into a closely monitored email address.
But it has also learned how to climb walls and fences,
to leaf through the pages of past injustices.

The passionate trumpet calls have never been muffled.
Their sound is sustained, woven into fresh wreaths,
but too faint to raise doubts about what’s real:
Why is everyone in the world—black and white—
drinking a toast and cheering under neon lights?
When I walk outside
why do I always encounter in the square
a person named The Forgotten
reciting a refrain called The Future?

Yan Li was born in Beijing, and is a painter, poet, fiction writer, and essayist. In the mid-1980s, he moved to New York, where he started a Chinese magazine publishing experimental poets from China. He was a member of the avant-garde group of visual artists called The Stars and was associated with the Misty Poets in China. He has published numerous books of poetry, several novels and some unique collections of poetry and paintings.


We try to hold the ashes
in the remaining, deformed palm.
When mixed with tears
the ashes solidify into cement.
Do we feel grief? We are too numb
even to sort out the fragments in the ashes.

They fall from the sky like snow
smudging our faces with their blackness,
as if a punishing spirit wanted us to see
our streaked faces when we gaze in a mirror.

So we must bathe,
try to cleanse ourselves,
though it’s not possible to wash away the memory,
or scrub away the stains.

Splintered like painful nerve endings
they are everywhere in our bodies,
crying out to us like rivers.

We roll the cannon ashes through the snow
as if creating a giant snowball
that could gather up the fears
that overpower the remnants
of our dreams, and roll away our silence.
The snowball of ashes is enormous, like a monument
that could collapse at any moment:

Translation from Chinese by Frank Stewart and Ming Di

Jiang Xue is the pen name for Jiang Shan, born in 1970 in Hunchun, Hubei province. He moved with his parents to an iron mining zone in Huangshi within the same province and grew up there, which was a quite unique experience. He started publishing literary works in 1987 and is a poet, writer, and artist. He is the founder and editor of Houtian Journal (Houtian means the day after tomorrow in Chinese).


Before the sunrise, already I wanted to go back home—
to the mind-twisting streets,
the rural town that’s not quite not impolite to me.

Here, like a wounded soldier, I’m missing my loved ones.
My wounds and I miss them.
I can’t say that I love the old barren land, or love
the disasters that circulate like currency.

I’m just an ant, knowing the cracked earth’s craving for rain.
I’m but a footprint, not afraid of walking farther
on the already endless road. I know spring has not yet arrived,
only fake flowers are blooming.

I want to send myself back, like returning a plague
to my hometown, where diseases break out one after another.
I want to prepare for loneliness, never yearning for a reunion
like the mythological cowherd meeting his weaver girl
every July 7th. My wounds do not exist for compassion...

(The above four poems were first published in Mānoa: A Pacific Journal of International Writing, Summer 2020)


My father is absurd,
a murderer and robber at a young age
with no accomplishments in his old age.
Now that I’m grown-up, the way he eyes me
reminds me how he looked at
his first woman.

My mother likes to wear gardenias
in her hair. She can’t figure out,
before rushing to the market, if she’s dressed.
If someone touches her left breast,
she would offer her right one.

My brothers and sisters, each is hungrier than the other.
Every New Year or on any holiday,
they would always fight for the offerings
placed at our ancestors’ shrine,
fruits that are coated with pesticides.

My elder brother joined the army
just to overthrow our father,
and died gloriously in the battlefield.
My elder sister loves music, chess, calligraphy
and painting but has gone far away with a hermit.
My younger brother, a rapist,
has escaped from jail and become a bandit.
He’s bought a third-rate star to be his wife.
My younger sister has died of AIDS,
with many ladybugs decorating her body.

Only I’ve become so kind-hearted and outstanding.
And I’ve thrown a Hongtashan cigarette butt
at my house and set all the stories on fire.

Translations from Chinese by Ming Di and Kerry Shawn Keys

Yang Biwei, born in Zhaotong, Yunnan province, in 1988, is one of the most acclaimed poets of her generation in contemporary China. She holds a doctoral degree in literature, has published two poetry collections and one essay collection, and has won the October Poetry Award as well as the Hu Shi Poetry Award in the Young Poets category. She is currently doing post-doctoral work in literature and art at Beijing University


You’ve brought the solitude of San Francisco to Wuhan.
Past 3 a.m., a dim light spills from under your door.

Unable to fall asleep among your books,
you lean over your computer as if guarding it.

You have parted the ocean to visit me—
my own path ahead is narrowing.

We visit the city where we lived for thirty years
And find it hardly recognizable—as if we had only sojourned here.

A modern highway takes us by our old homes—
Born in this country, we must pass away here.

To push back old age, what things can we evoke from youth:
passionate times, former lovers that our bodies remember?

Miraculous young love and its mysteries that our
bodies knew—we seem now to reside in a foreign place.

Everything falls apart, our bodies become ruins, the flames
go out. You stand among the broken walls of our hometown

Liu Zongxuan, born in 1961 in Qianjiang, Hubei Province, has published three books of poetry. He lived for 10 years in Beijing where he worked as a literary editor and then returned to Hubei. In recent years he has worked at Jianghan University in Wuhan as Director of the Institute of New Poetry. He recorded the reading in his mountain home during the 2020 quarantine.
© Ming Di