From Dali, China—Poetry travels in the time of quarantine (5) 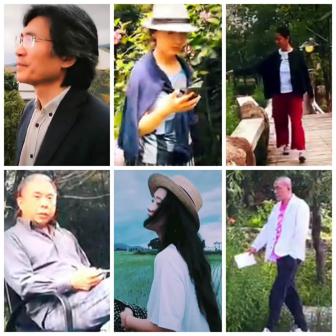 July 13, 2020
In the “Poets Village” of Dali, China, most of the residents travel every year between their hometowns and their homes in Dali, an ancient city well-known for its scenic landscape and high sky with white clouds in the modern province of Yunnan, but this year they were stuck in Dali due to the Covid-19 quarantine. They have been "forced" to spend more time enjoying nature and the special ecology of southwestern China. The following video shows how they live in Dali, far from big cities, with green fields, hills and streams. (The poems are not specifically about quarantine, as in Parts 1, 3 and 4. Only Part 2 is a special feature about quarantine in Wuhan.) The creative performance of these six poets from Dali ends the series, but poetry will continue to travel in the post-quarantine time and continue to promote, hopefully, international dialogue while the world is even further torn apart.

I can’t stop what glitters in my eyes,
what makes them flicker and shine in the May night.
My eyes, your eyes. So far,
right here. How can I forget tonight?

Your eyes travel and wherever they go,
they make a new sky, mother. Tonight
and every night, as long as I stand under the sky,
I see you, radiant.

(Translated from Chinese by Tony Barnstone and Ming Di)

Shu Cai, poet and translator, was born in Fenghua, Zhejiang province in 1965 and holds a PhD in French Literature. He has published five books of his own poetry besides translations of Pierre Reverdy, Rene Char and Yves Bonnefoy. He was awarded the medal of a Chevalier (knight) of the French Ordre des Palmes académique in 2008. Shu Cai works for the Institute of Foreign Literature at the Chinese Academy of Social Sciences and divides his time between Beijing and Dali.


People die every day.
Every day, new leaves fall in the garden.
The wings of butterflies or dragonflies get stuck to the earth.
The mountains outside my window are still.
They must know the change of seasons, life after life.
I work every day until my back aches, until I can no longer bend.
I hate the pleading to stay, the cherishing that goes too far.
There’s nothing that’s worth it.
Far from whatever you believe. Far from all you really love.
Someone’s life and death will eventually become yours and mine
if we stare long enough at this world.

(Translated from Chinese by Neil Aitken and Ming Di)

Guan Jingjing, artist and poet, born in Henan in 1983, was a visiting artist in Salzburg, Austria in 2011, shortlisted for the 9th AAC Art-China Young Artist of the Year in 2015, and her work included in the anthology "Chinese Contemporary Art Yearbook 2014". She works for many art galleries , art institutions and personal collections. Her publications include Guan Jingjing: 2008-2013 (Hong Kong, 2013) and Guan Jingjing (Berlin Damm und Lindlar Verlag, 2015). She lives between Beijing and Dali.

I should get up and breathe the spring—
But all I do is fantasize from a thousand miles
Of the breeze between mountains and streams.

Wind from the low valley blows away the petals
On the high hills, snow top mirroring the moon
Over Lake Erhai. Bright light runs its needle through my eyes
All my days of murdering time
Are spent in the valley
All my words are flowers falling all over

(Translated from Chinese by Ming Di and Tony Barnstone)

Yu Er is a poet, dancer and artist. For many years she has been exploring possibilities to extend the limits of poetry and experiment in various directions, from body language in dancing to visual art and to free expression in space. Yu Er has published a collection of poems titled Twilight of Spring and Autumn. She divides her time between Beijing and Dali.


The same air flows around us.
It’s startling when my index finger and
even my name are ignited in the same season.
It’s third century, rusting lumber and sleep.

In front of me, wind slowly stretches
its broad wings, and the Yangtze River flows upward.
I hurry to the riverbank. Where is the hero
who can stop the migrating plants from departing?

Or hold back the pain of eloquence?
Give me some other role. Let someone else take my place,
traveling over thin ice. Let me gaze at the mountain range
and my sadness pour out.

For the rest of my life, only my memories last.
I know I will die of idleness, nice scenery, and wine.
I might as well be the yellow sparrow who is
observing me, a landscape scroll for my beloved.

(Translation from Chinese by Ming Di and Frank Stewart)

Zhao Ye (1964-) was originally from Sichuan and holds a BA in English from the Sichuan University. Along with his fellow poets, he co-launched the "Third Generation" poetry movement in 1982 and edited the Third Generation magazine. He has published several books of poetry, been translated into a few languages, including a German edition Zurück in die Gärten (Edition Thanhauser, Austria, 2012). He was awarded the Poet of the Year in 2012 by the Heavenly Question Festival of China. He lives between Beijing and Dali.


Some people go on a journey, while others
Get left behind by the length of the journey
The travelers walk fast along the tracks
They gallop into what fate has in store for them

As a father,
I feel it’s a sin to have brought you
into this world.

Perhaps all I can do
is to build for you
a few square inches of free space
when you’re still babbling.
The blue sky with white clouds.
The land, full of flowers.
All borrowed for you.

What I fear most is you growing up.

Indeed, as a father,
I could give you love without end,
even if I die from it, torn to pieces.
But eventually the day comes,
deep in the jungle when you
will discover that your carefree childhood
of white clouds and flowers
were all fake,
And your father,
even if he could grow
three heads and six arms in a flash,
can only watch wide-eyed as you,
day by day,
are swallowed
by the darkness.

And so, what I fear most is you growing up.

Pan Xichen (1963-) emerged in the 1980s as a campus poet and won many literary awards. After 20 years as an entrepreneur in the advertising business, he returned to poetry in 2007 and has maintained a high profile by editing several top national journals. He founded his own independent journal Poetry Reading Quarterly in 2009 and subsequently Poetry Translation Quarterly and Poetry Critics Quarterly. He lives between his hometown Harbin and his new home in Dali, Yunnan province. He has received numerous awards such as Rou Gang Poetry Prize, Shanghai Literature Award, Ten of the Best Poets 2016, and Li Bai Poetry Achievement Award.