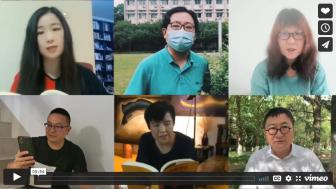 June 24, 2020
Light comes in various shades and shadows. Li Cheng'en sees a pink color in sunrise and sunset and makes it her personal rouge-ism, an environmental feminism that she has been preaching. For Yi Lai, spring light is a darkroom where one develops film. He becomes what he sees in the light but in the end finds himself but a small piece of darkness. A Mao examines a glass vessel under a spotlight (as in a museum) and reflects on its changing functions. Shen Haobo sees himself playing chess with the setting sun on a winter day, the snow field as an imagined chessboard. Yi Lei sees the trick of light in a mirror and recognizes the multitudes within herself as a single woman. For Li Sen, sun (with its moon) not only sheds light on objects such as tangerines but positions the objects in space-time, allowing them to actively (as subjects) affect, in return, the source of light in a way that they (tangerines) become the orange sun, or the pale moon.
要有光：隔离时期 诗在飞行——中国诗人朗诵视频第4辑


For a few years, I’ve faced the sky with a plain face,
but held onto a belief in rouge-ism. I see a pink hue
in the sunrise, and my sunset is even more of a rouge
I trust. Mountains offer a dark shade for my eyebrows,
the smoke from the chimneys in the village curls up
contouring the small hills on my cheekbones.

Beijing mornings belong to my rouge-ism, my forehead greets
the first ray of light when Gushan Village is still asleep.
I comb hair with clear streams and wash my face with the greens
(environmentally friendly, isn’t it?) while my rouge-ism climbs up
from the east, a skinny body wavering in the distance,
a model of shyness, a weaving girl forgotten by the world—
she approaches me and captures me when I raise my head.

With a wooden comb in hand, I bow to the image of rouge-ism.
What do you try to say to me? I’m facing the east now,
to Empress Dowager Cixi. She is taking a walk behind the clouds,
the powdered rouge on her face flaking off
like tears dripping over the Eastern Qing Tombs.

(Translated from Chinese by Ming Di and Neil Aitken)


Li Cheng'en, born in Anhui in the 1980’s, is one of the most prolific poets and writers of her generation. She has published eight books of poetry and essays so far and has won numerous poetry awards. She lives in Beijing at present.


Hah, what a sultry profession.
In the darkroom he becomes what he sees—
a peach, a butterfly, or a flying bird.
If he sees a garden he will feel rain
in his left eye while on his right knee
many little creatures rise from hibernation.
He never has doubts about his vision, as he trusts
the lens that passes judgment.
He knows for sure that spring is here—
there is bright light outside, and a dazzling young girl
in the park or on a T-shaped platform.
(Here comes his fantasy.)
He knows she will take off her hat, then her scarf,
and will watch out for pollen or mosquitoes.
All this knowledge comes from the process of developingyilai
and restoring things to their originals, or to “more than likely,”
like what we learn from books about optics.
In the tons and tons of films he even thinks that he owns
a whole pipeline of spring.
But when he tries to find his body—
all he sees is a small bit of darkness.


Yi Lai (pen name of Zeng Wei) is a poet and scholar, born in1976 in Zhijiang, southern Hubei. He graduated from Central China Normal University with a BS in Computer Science and a PhD in Comparative Literature and World Literature. He serves as the chief editor of the university press at his alma mater. He was a visiting fellow at the University of Pennsylvania from 2017 to 2018.


Its beauty lies in its empty body,
clean and fragile it has to be.

Bathing in full light, it looks
comfortable like a cabbage,

or a lotus holy
and sacred.

But you can’t kiss it with your lips.
It’s a heart untouchable.

Not even by love.
Or war.

A weapon, gorgeously wrapped
in a spotlight at midnight.

They use the vessel to hold air or candies.
I fill it with tears or my soaring anger.


A Mao is the pen name of Mao Juzhen, a poet and novelist born in 1967 in Hubei, central China. She has worked as a literary editor and became a full-time writer in 2003. Her publications include novels, poetry, and essays. Her poetry has won the Qu Yuan Literary Prize from Hubei Province.


I’m flying back to Beijing
and looking out—
I see a thin layer of whiteness
over the city.
Snow.
A chessboard.
But who is playing chess
with me?
Nobody. Only me
and the bloody setting sun—
watching each other
across the snowboard.

Shen Haobo (1976-) was born in Jiangsu province and graduated from Beijing Normal University. He wrote a critical essay as a college student that started a huge debate in 1999, known as the Panfeng Debate, between the spoken language poets and the intellectual group. He launched the Lower Body Poetry in 2000. He is the founder of X-iron, an independent publishing house in Beijing.


Of course I know her.
She is one and many,
A multitude flashing on, then
Blinking off—on, off—
Watching out from the tidy blank
Of her face. She is silent, speaking
With just her mind. She is flesh, a form,
But also flat, a mute screen.
What she offers you, by no means
Should you accept.  She belongs to no one,
Sitting like a ghost beyond her own reach.

And yet, she’s there—I mean me—
Behind glass, as if the world has been cleaved,
Though something whole remains,
Roving, free, a voice with poise and pitch.

She’s there—me—snug in the glass,
The little mirror on the bedside
Doing its one trick
A hundred times a day.
You didn’t come to live with me.

—From “A Single Woman's Room”

(Translated from Chinese by Tracy K. Smith and Changtai Bi)


Yi Lei was born as Sun Guizhen in Tianjin, China in 1951. She started publishing poetry in 1974 and was one of the most courageous women poets in the 1970s and 80s. She studied creative writing at the Lu Xun Academy (1984-1988) and earned a BA in Chinese Literature from Beijing University. In 1992, she moved to Moscow where she lived and worked as an artist for six years. Eight collections of her poetry have been published, among them A Single Woman’s Bedroom, The Love Poems of Yi Lei, Women’s Age, and Selected Poems of Yi Lei, and she was awarded the Zhuang Zhongwen Literature Prize, among other honors. Yi Lei traveled to many countries and died of heart attack in Iceland on July 13, 2018. My Name Will Grow Wide Like a Tree: Selected Poems by Yi Lei, co-translated by Tracy K. Smith and Changtai Bi, is forthcoming from Graywolf Press in November, 2020.

(Translated from Chinese by Gregory Pardlo and Wang Hao)


Li Sen (1966-) was born in Yunnan, southwest China, and has lived there all his life, graduating from Yunnan University in 1988 and currently serving as the Dean of the College of Liberal Arts at Yunnan University.  He has been experimenting with neo-classical poetry: three or four characters a line, a simple form known as the “Shi Jing” style (i.e. the style as in The Book of Songs, poems from the 11th to 6th century BCE). This renewed ancient form (as well as the theme) sounds lyrical and fresh to the modern ear, a de-construction of modern poetry with truncated lines and words between which light cuts in.