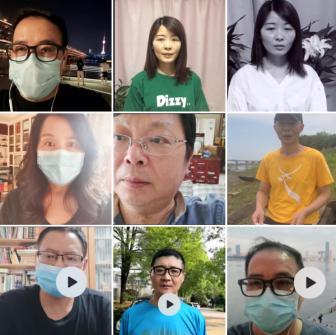 May 25, 2020
Poetry as witness. Poetry as statements questioning injustice. Poetry as a diary. Poetry to express personal feelings and care for others. Poetry for self-healing and ecological concerns. Poetry was all of these and more in Wuhan when COVID-19 broke out there on a large scale in January, 2020. Many people posted poems online as soon as the city was locked down on January 23 as they were shocked by the news of the coronavirus as everyone else in the country. Hua Zi and Wei Tianwu kept a poetic diary, Jian Nan and Huang Shazi published 18-30 poems about the lockdown, Zhang Zhihao published 25 poems as his lockdown diary, Chen He 沉河 collected many quarantine poems and published them on his online platform, the Yangtze Poetry Publishing Center, and Yu Xiaozhong 余笑忠 introduced many of these poems as a professional DJ at Hubei Radio. Many other poets such as Xiao Yin 小引 decided not to write poetry over this unprecedented crisis but his Wuhan Diary attracted more readers than ever from all over the country; his diary was more informative and more provocative than poetry apparently. Among all the writing during the epidemic, Huang Bin’s poetry-sequence was the most touching; he wrote about how two of his family members were infected with the coronavirus and one of them died on February 22; how his home was locked down with the front door sealed due to family members being infected; and how he was coping with family deaths and all the difficulties he encountered, such as not being able to secure a hospital bed, etc. etc. "The world collapsed on me” he wrote, but he told all the unbelievable stories in a soft, calm tone. There are, of course, worse stories untold. The following seven poems have been selected from hundreds of pieces published online, through official media and/or personal blogs. They represent the various voices of poetry from Wuhan. (Many other poets such as Liu Jiemin 刘洁岷 and Li Jianchun 李建春 have also kept a poetic diary of the quarantine whose work will be introduced in the future due to limited space this time.) When the world is divided, falling apart, may poetry help promote mutual understandings across regions and countries and across languages.
隔离时期 诗在飞行 II——武汉诗人：             七首诗讲述一个故事

Xiong Man 熊曼
SOUND HAS DISAPPEARED FROM THIS CITY 声音从这座城市消失了


Birds fly in a circle above the Yangtze
Over and over, refusing to land
As if they’re masters of the city patrolling the river.
But they’ve lost their companions,
The whistles of the ships.

Gray, century-old buildings stand
By the river bank where
The French concession used to be,
Like a scene in an old movie.
Someone walks by and falls on the street.

A few women in white are weeping
In one of those buildings.
They’re doctors and nurses
Wives and daughters, having no one
By their side to wipe their tears.

Windows hang in mid air
Like dark holes
But there’re no eyes
Looking out from there,
No ears listening to what’s outside.

Translation from Chinese by Ming Di

Xiong Man (1986-) is from Huanggang, Hubei province. She lives in Wuhan and works as an editor of the journal Chinese Poetry (monthly). She was among the first group of poets interviewed by journalists from The Paper in early February and this poem of hers was published along with her interview.

Will truth burst out of the mouths 口
When they’re sealed tight?
Will you really be able to breathe after you die?*
I only want a beam of light
Light from the sun
Light from the moon
Light form the light—when God says
Let there be light and there comes the light

I’ve stayed in the low, wet shadows
Like an old tree and I’m about to
Grow mosses on my feet and
Wood ear mushrooms on my shoulders

Translation from Chinese by Ming Di

Hua Zi was born in Tianmen, Hubei province, and graduated from Wuhan University. She has authored three collections of poetry and several collections of essays. She is a prominent writer in Wuhan and has won the Qu Yuan Art Award, Bing Xin Book Award, Changjiang Prose Award and inclusion in the 2016 Top Ten Women's Books.


March 10th
The tree warbler that’s been tweeting
for a month and half
has flown away somehow
from our small community
Its tweeting had been most healing
For a month and a half, whenever I heard its voice
From early morning until dusk
I felt free, my body lighter
Nü-ni, nü-ni—Green mud?
Its clear sound an endless loop
Opening a new window, a new dimension
In my world
Maybe it’s a free spirit
Travelling alone, hiding in the mountains
Among the graves in the bushes
Perhaps it loves the deep tranquility of mountains
And has a sympathy for human destinations
Those who return to the mountain mud
Find honor and acceptance
and transcendence in its tweeting
I’ve searched for its scientific name before
But I’m more used to calling it tree warbler
This helps me to relate to Bai Juyi's poems
I even call it a titmouse
A private nickname
In all these years that I’ve lived in this community
This is the first time I’ve heard its tweeting
It must have a home in the mountains
That it has returned to after receiving the souls
Of the dead

Translation from Chinese by Ming Di and Neil Aitken

Huang Bin (1968-) was born in Redcliff in southeastern Hubei, a historical place well known for the Redcliff War in the year of 208 during the Three Kingdoms Dynasty. Huang Bin studied journalism at Wuhan University and graduated in 1990. He started writing poetry in 1983, won the first place in the national poetry competition in 1994, and has continued writing poetry while working as a journalist for the Hubei Daily. He received the ninth Qu Yuan Literary and Art Award in Hubei. Two of his family members were infected with the corona virus and one of them passed away on Feb 22. This poem is from his sequence of elegies.

It’s sad that we have to isolate ourselves
At home. It’s sad that some people can’t even find
a safe place to take refuge. It’s sad that one day
We will be cut off from the world
The fence around the dead sheep
Too late to fix

It's sad that TV screens always run
Ice-cold numbers. It’s sad.
Spring is here, but I can only nest at home
Watching the pouring rain
Sweep over the human world again and again
Awash in sin and shame

Translation from Chinese by Ming Di and Neil Aiken

Jian Nan, pen-name for Lu Xiongfei, originally from Tongcheng, Hubei province, is currently teaching at Huazhong Normal University in Wuhan and serves as the deputy director of the Poetry Research Center there. He has published three collections of poems. In early February, 2020, he published a series of poems questioning the origin of the corona virus and the whereabouts of the rescue supplies from all over the world that the Wuhan Red Cross mishandled.

He preserves his dog's body with spices.
He places the mummy in a prominent place
in the living room where his late wife
used to put something under the dining table
as a footrest. She died of the virus not long ago.
There’s nothing new in the way he raises dogs.
Everything he does has been done by others
countless times, including the way he handles
the dog’s corpse. He follows the ancient rituals
and believes in souls. As long as the clothes
aren’t all removed, the spirit won’t depart.
Dogs have the greater advantage because they have
so much fur. Each hair represents an independent soul.
How he had wanted to stay with his dog.
But the departure of his wife has completely
left the dining table out of balance.
He has to use the mummy as a table foot.
He knows his wife’s death has nothing to do
with the dog. Even if the dog were still alive,
running around with his body covered in souls.
In Egypt, the rising height of the palm trees
and the growing power of God are related.
The length of a person’s death equals
the accumulation of their loved one’s sleep.
He wants to figure it all out before going to bed.

Translation from Chinese by Ming Di and Neil Aiken

Huang Shazi (Yellow Sand) is an accountant, amateur runner and poet, born in Honghu in Hubei in 1970. His poems have been included in various poetry anthologies in China. He has been awarded with the Hard Skeleton Poetry Award, Contemporary New Realism Poetry Award and the Alternative Poetry Award. He lives in Wuhan.

Wei Tianwu 魏天无
THE DEATH WE DON'T KNOW ABOUT 我们不知道的死亡


Endless. Ever endless—
The hunt is on. One in the front
one in the back one left and one right.
Death is not a taboo. It’s being photographed.
Shared. Downloaded. Saved. And deleted.

Touch the body temperature that remains
in the ashes of the flames. Temperature
of mixed bodies still burning.
In the lotus pond at the foot of Biandan Mountain,
wind-withered leaves float
circling around their ragged stems.

Translation from Chinese by Ming Di and Kerry Shawn Keys

Wei Tianwu (1967-) is a scholar, writer, and poet. A native of Jingmen, Hubei, he has lived in Wuhan for a long time. He holds a doctoral degree in literature and is currently a professor of Chinese Language and Culture at Central China Normal University and a research fellow at Hubei Research Center of Literary Theory and Criticism. His publications include The Poetics of Narration in Zhang Zhihao’s Poetry, Contemporaries: Poetic Witness and others. He has also published poetry and essays.


I often come here, the Hanyang Gate,
When I’m in deep despair
Having nowhere else to go
There're usually many people gathered
Under the bridge to watch the scene
Now as before, the big river flows east
The sound of the waves resonates in me
But few people can hear it
I look over the railing, like a tourist, at the sunset
Spring is here finally
A young girl takes off her mask
Resting her chin on the shoulder
Of her beloved—
She wants to say nothing
Just to stay silent like this
All her life
Plum blossoms fall
Magnolias bloom
Trains pass along the bridge above our heads
While the river flows on below
All this seems to be happening
In the life before this one.

Translation from Chinese by Ming Di and Kerry Shawn Keys

Zhang Zhihao, one of the most prominent writers from Wuhan, was born in 1965 in Jingmen, Hubei province. He graduated with a degree in history from the Central China Normal University in 1988, taught for over ten years and then joined the Wuhan Writers Union in 2003. He has worked as the executive editor of Chinese Poetry quarterly, and has published novels as well as poetry which brought him several major awards in China such as the People’s Literature Award, Southern Media Literature Award, and the Lu Xun Literature Award.
© Ming Di