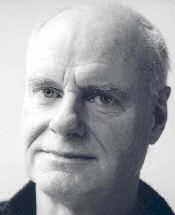 (The Netherlands, 1946 - 2017)
© Tineke de Lange
Biography
Initially, Robert Anker wrote poems like those of Christ van Geel – small, concentrated verses full of symbolism. Over the years, however, he has developed into a ‘lifesize’ poet who makes use of social and topical themes. From minimal to maximal, from stillness to vitality, Anker’s poetic development reflects what took place in Dutch poetry in the 1980s – a considerable upheaval.
In Robert Anker’s poetry (as in his prose) you can see that the TV is on and the newspaper read. Not that the poet is to the fore with corny songs or that he constantly praises new man to the skies, but you sense his zest for life and furthermore his willingness to reflect on existence. Sometimes you get a hint of the rapper in his poems, at other times a touch of the foreign charwoman. Anker’s poems are colourful, displaying great pleasure in language and images. The worn-out symbol of the autumn leaf, for example, is given a more updated look: “her randiest chlorophyll negligee”.

In a certain sense, you could call him a modern humanist poet, bearing in mind the shortcomings of De broekbewapperde mens (Man, trousers a-flutter), the man of the title of one of his recent collections, but without any moral judgment. The main character of these poems would seem rather to be inspired by a cheerful sort of sadness, a brisk acceptance of inadequate homo sapiens. The tone of his poetry is sometimes almost nonchalant, but behind this, undiminished, the words and problems of existence lie concealed:

Without death life is meaningless. Voilà.
For the rest it is the question of living through life. That we do that.

Both the tone and the message itself betray their casual-sounding though intense involvement in the great issues of life. This stamps him as one of the most prominent Dutch poets of the present time.
© Rob Schouten (Translated by John Irons)
Selected Bibliography

Interview
An interview with Robert Anker, by poet and critic Remco Ekkers

BALLAD OF MY AUNT CALLING TO WISH ME A HAPPY BIRTHDAY OR VICE VERSA It\'s all lukewarm mush Dad mum, where your son counts his days though not his drinks ONE OF US VIII Don\'t forget to comb your hair

Dad mum, where your son counts his days though not his drinks

ONE OF US VIII

Don\'t forget to comb your hair

I was late as usual

HOMESICK FOR THE DAY BEFORE YOU CAME

HOMESICK FOR THE DARK

He always wants to play chess with us, but he misses the pieces