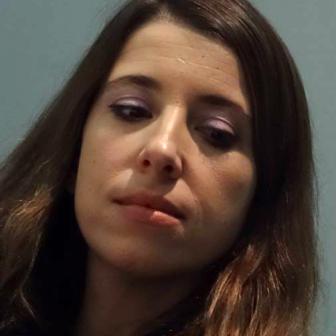 (Spain, 1976)
Biography
Sonia Bueno was born in the Spanish North African enclave of Melilla, and studied English Literature and Literary Theory at the Universidad Complutense in Madrid. She is a trained sommelier, and runs a wine bar in the centre of Madrid. She is a member of the poetic collective Lavarca Ebria, which investigates the limits of the word and the relation of poetry to other art-forms such as dance or photography. Bueno has published two collections: Retales (2011, winner of the 1st International Poetry Prize from the Fundación Centro de Poesía José Hierro), and Aral (2016), both of which were illustrated by the artist Eugania Criado. Her poems have appeared in various magazines, including Catálogos de Valverde 32, Heterogénea, Galerna and Caligrama. Her work has been translated into Galician, English and Dutch.
Bueno is interested in philosophy as much as in poetry, and in poetry-as-philosophy above all: Retales and Aral are densely plotted books, in which a series of images and ideas are lifted up almost to abstraction by their constant reiteration. Etymological certainties are broken down in order to create new perspectives, new ways of seeing the world through language. Think for example of the way in which the word ‘huso’ (‘spindle’) recurs throughout retales, often broken down into ‘(h)uso’, the parenthesis reminding us that the word contains within it the labour of ‘uso’ (‘use’). Or else consider the punning – playful and yet deadly serious at the same time – which in Aral sets the detritus of human life against the struggling body of the dying Aral Sea on the Uzbekistan-Kazakhstan border: ‘latas’ in Spanish means both ‘tin cans’ and ‘heartbeats’; the ‘nudos’ that keep reappearing are physical ‘knots’ as well as textual ‘cruxes’. Retales is a book which works with the idea of the fragmentary as a way of approaching the unsayable and unimaginable, of building a character and a personality out of Beckettian fragments.

Although fully grounded in her own idiosyncratic Spanish, Bueno has a wide knowledge of European (particularly English) poetry and languages: it is no accident that 'retales' should suggest a few English analogies: ‘retails’; ‘retells’; ‘rituals’, even ‘re: tales’. Bueno’s second book, Aral – the fruit of a trip to a devastated post-Soviet landscape – is in many ways a deliberate inversion of retales’s attempt to create a world out of fragments: it shows us the collapse of a world, and an individual subjectivity, under the assault of political reality and the challenges of a ruined planet.
© James Womack
Bibliography

The house and the birds

THE PLACE THEY TRAVEL

BECAUSE THE WORD IS AN EYE

TO WALK INTO THE EMPTY SEA