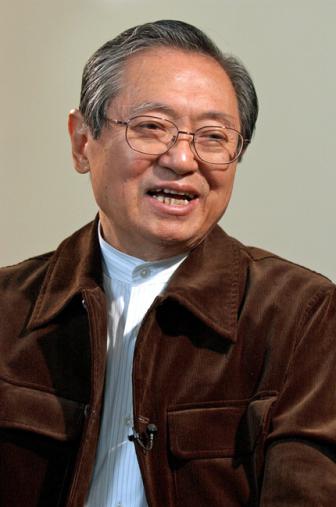 (Japan, 1931 - 2017)
Biography
[Update, November 2018: Beneath the Sleepless Tossing of the Planets, a new edition of Ooka's poetry in English, translated by Janine Beichman, is now available. See link]

Makoto Ooka, who passed away in April this year at the age of 86, once pointed out that the modus operandi of traditional Japanese poetry is a dynamism between two conflicting mindsets: one that is willing to let go of one’s ego and create harmony with others, and another that pursues ultimate solitude, what he called a sort of “party” attended by “lonely hearts” — Utage to Koshin.

Ooka is a rare poet of reconciliation and integration. He joins opposing elements and creates a whole, but does not analyze and reduce the whole to parts. He combines concrete images and abstract concepts, storytelling and lyricism, everyday matters and transcendental experiences, eroticism and natural beauty. In his literary criticism, he rediscovers past tradition through contemporary eyes, filling the space between the fixed forms such as tanka and haiku and modern free verse.


Classical Japanese poetry was in many ways composed through collaboration. It was a common practice to organize poetry festivals in the palace, where poets competed with each other by improvising poems on a given subject.  Romantic verses were exchanged between a man and a woman. Collaboration was even accomplished across time and space in the form of reference to or pastiche of works from centuries before. And most notable of all, there was the renga tradition, in which a group of poets composed a linked poem in one sitting.

In all of these creative processes, Ooka saw the Japanese characteristics that respect harmony within a group and enjoy the music that arises from an encounter. At the same time, he pointed out that best poems were always made by poets who knew the bitterness of solitude and brought its remnant into the collaboration process. In fact, argued Ooka, it is typically group dynamics — the party — that reveals one’s real identity as a lonely heart and allows it to shine most brilliantly.

Ooka put his theory of a “party" of  "lonely hearts” into practice by enfolding the old renga tradition into the modern version of ren-shi. He conducted numerous sessions both in Japan and in foreign cities such as Berlin, Frankfurt, Paris, Helsinki and Rotterdam, home to this website. In fact, Makoto Ooka was a popular figure at Rotterdam Poetry Festival, invited six times.   (And see the 2015 Trilingual renshi project and chronicle)

It is thus only natural for us to remember him and pay respect to his achievements through a collaborative project. We decided to choose one short poem of his and translate it into many different languages by poet-translators around the world. And here is the result: the second part of the poem Kaze no setsu (風の説) translated from three languages into fifteen, including Korean (Nagi Yoshikawa), Chinese (Ming Di), Burmese (ko ko thett), Turkish (Nevin Yeni and Gökçenur Ç), Hebrew (Batsheva Dori-Carlier), Persian (Saeid Banaie and Mostapha Samady), Arabic (Norddine Zouitni), Macedonian (Nikola Madzirov), Serbian (Dalibor Klickovic), Dutch (Jan Baeke), Irish (Leanne O'Sullivan), Occitan (Aurélia Lassaque), Catalan (Josep m. Rodríguez), Spanish (Julio Carrasco), and Galician (Gabriel Álvarez Martínez). The translations were based on the original Japanese text, an English translation by Janine Beichman and a French translation by Dominique Palme, assisted by footnotes, references and email discussions.

This project is a virtual communion of poetic sensitivities across languages, countries, and cultures. At the center of it are 14 lines written by a man with a lonely heart. Rest in peace, Makoto Ooka, and thank you for the treasures you left behind.

SPEAK PLEASE I BEG YOU