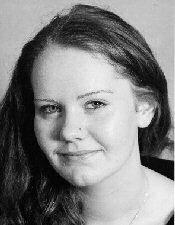 (Ireland, 1983)
Biography
Leanne O’Sullivan was born in Cork and is currently completing her Bachelor’s degree in English at University College Cork. Her first collection Waiting for my Clothes was published by the British house Bloodaxe when she was just 21 years of age. By that time she had already won many of Ireland’s prestigious poetry prizes including first prize in the Seacat poetry competition, the RTE Rattlebag Poetry Slam and the Davoren Hanna Award for Young Emerging Irish Poet.
Waiting for my Clothes provoked American poet Billy Collins into saying:

“What is remarkable about Leanne O'Sullivan is not that she is so young but that she dares to write about exactly what it is to be young. A teenaged Virgil, she guides us down some of the more hellish corridors of adolescence with a voice that is strong and true. For that alone, she deserves our full attention.”

O’Sullivan’s work is not only free of such strictures but also free of any signs of their influence. The social revolution which has occurred in Ireland in the last two decades has made the youngest generation feel as if their immediate predecessors were raised on a different planet. O’Sullivan literary precursors in this field were not only Irish poets such as Mary O’Malley and Nuala Ní Dhomhnail but also the American poet, Sharon Olds. While inevitably influenced by the immediate tradition young Irish poets are as easily informed and influenced by poets from elsewhere, in a way that is even more invigorating in this globalised world than it was in the Sixties and Seventies when Montague was being affected by Carlos Williams, Eavan Boland by Adrienne Rich and Heaney by Snyder and Bly.
© Patrick Cotter
* The Midnight Court is a 1,000 line comic poem which covers such subjects as women’s sexual rights and the duties of the clergy in this regard.

The Guardian
A poem published in Guardian unlimited

THE TOUCH OF HIM