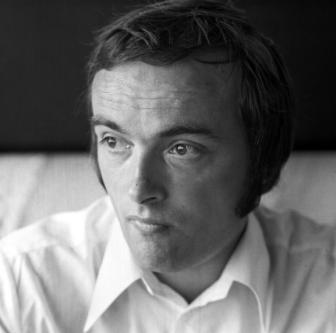 (The Netherlands, 1935 - 2020)
© VPRO Gids
Biography
Two poetry collections were published by Hans Sleutelaar, with a 25-year pause between them. The first, a slender volume called Schaars licht, appeared in 1979; the second, Vermiste stad, in 2004.

It is not due to these two collections that Sleutelaar became so influential. In fact, his one-line poem, ‘Wollt Ihr die totale Poesie?’, has had even greater influence, and it encapsulates Sleutelaar’s strengths: it is short, sharp, leaden with associations, and it doesn’t look like a poem. The ‘Poem’ comes from 1965 and is Sleutelaar’s only well-known poem – which raises the question why, with such a modest oeuvre, he has become such an important figure.

He was always at the right place at the right time. He was from the early 1960s, with Armando, Hans Verhagen and C. B. Vaandrager, one of the Dutch editors of Gard Sivik, originally a Flemish literary journal that developed into a leading journal of that decade – and of its successor De Nieuwe Stijl. He also was an editor of the Haagse Post, which in the 1970s introduced a Dutch version of New Journalism. The way in which he, often with Armando, conducted his interviews was groundbreaking and enormously influential.

He earned his money through advertising and used the ad texts for his poetry, sometimes barely disguised and often in collaboration with Vaandrager. He stayed in Ibiza with Jan Cremer, edited his debut, and was, at the publishing house De Bezige Bij, also the editor of Johnny van Doorn, whose stories he efficiently and effectively sharpened.

Sleutelaar may not have written many poems, but as he told Martin Bril, he was ‘in a different kind of way involved in what was going on. As a pacesetter, organizer, propagandist’. And it is true, his writings on the visual arts and poetry reveal a keen insight into the strategies of art and literary history. At a time when it was widely accepted that one need only to read a poem well to understand it, Sleutelaar showed that ‘no (artistic) truth can be known outside its contemporary stage in the historical process, that which transforms reality’.

Perhaps this is why it took so long for him to collect his poems into the volume Schaars licht, and why some of the poems there are so heavily revised that they are almost unrecognizable from the originals. The poem ‘Cool Blue’, originally from 1958, typifies this.

cold are the words – and fatal

In 1958, he had used the word ‘cool’ instead of ‘cold’; and later he erased stanzas including heaven, hell, the sun, ‘angry lips’ and ‘cloud pillows’ – in short, any semi-traditional sounding metaphors were scrapped. Three lines remain, in which great concepts are presented without any fuss. In the ’50s, a poem had a different function, and thus, now, different words were needed.

In Vermiste stad, Sleutelaar has nothing left to prove – he is no longer trying to fight for his literary historical position. Now, he just writes powerful poems without much pretention. Sleutelaar now writes poetry as he envisioned it, but as he could not write in the ’60s, because then reality itself was already interesting enough. ‘If it lasts long enough, the avant-garde becomes a convention in itself’, claims Sleutelaar. This explains why Sleutelaar’s ideas were so far ahead of his poetry.

Hans Sleutelaar, who suffered from Parkinson's disease, died in June 2020 at the age of 84.
© Bertram Mourits (Translated by Mia You)
Bibliography