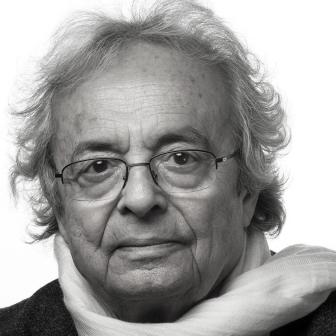 (Syrian Arab Republic, 1930)
© Pieter van der Meer / Tineke de Lange
Biography
The poetry of the Syrian-Lebanese poet Adonis perpetually poses questions, questions that are seemingly put to both the reader and the poet himself. Indeed, in the case of Adonis his poems actually seem to continue thinking. They are a reflection of reality but at the same time a reality in themselves. Poetry like this that succeeds in being simultaneously mythical and realistic is rare. Little wonder, therefore, that Adonis is viewed as one of the world’s best poets and is someone who, for many years, has been seen as a serious contender for the Nobel Prize for literature.
Adonis is the pseudonym of Ali Ahmad Said Esber, who was born in 1930 in the Syrian village of Qassabin. In the fifties he was imprisoned for a while because of his affiliations to a secular, nationalistic political party. Even after his release he regularly had clashes with the authorities. He moved to Lebanon, the country where according to legend Adonis, the God of beauty, was born. Since 1985, however, he has been domiciled in Paris. Because he has become the renowned but controversial individual he is any notions of returning to the two countries where he has his roots are absolutely out of the question because there he would be an attractive target.

In a recent interview, Adonis declared that he sees it as his task to make people angry. Louis Paul Boon claimed that you have to keep on badgering people until they develop a conscience: words that could have been spoken by Adonis. What one can at least establish is that his poetry is designed to shake people up, not to consolidate or obscure matters. Although Adonis’ poetry invariably retains its mythical proportions, it is not infrequently allied to actual and major events. His collection A Time between Ash and Roses (1971) emanates, for instance, from his experiences and emotions surrounding the Six-Day War of 1967 when Israel captured a number of territories, including in Syria and Lebanon. The Book of Sieges (1985) constitutes a reaction to the Israeli invasion of Lebanon in 1982.  In two long poems Adonis reflects on the World Trade Center attack in New York of 11th September 2001 ‘A Grave for New York’ and ‘Concert for 11 / September / 2001 Before Christ.’  In the latter poem the following lines somehow typify Adonis’ attitude to ignorance and blind faith.

Apollo, god, lover, beloved,
can you still distinguish between a face and a pair of buttocks?
And you banished and despised one, rejoice and celebrate.
Paradise is here, there, under your feet.

It is not only what Adonis actually has to say in his poetry that is striking but as far as form is concerned he may also be viewed as one of the great modernizers of Arabic verse. In a certain respect his poems have always retained their traditional link and not infrequently classical Arabic poets feature in his work. Nevertheless, his ever-evolving oeuvre may safely be said to have amounted to an essential innovative source for poetry composed in Arabic. So much so that the writer and translator Samuel Hazo once asserted: “There is Arabic poetry from before and after the arrival of Adonis.”

A SONG OF TEMPTATION FOR NOTHING