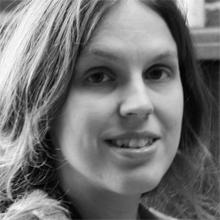 (The Netherlands, 1978)
Biography
Marije Langelaar (Goes, 1978) is an artist and poet. She won literary acclaim with her first collection, De rivier als vlakte (The river as plain). For her second collection, De schuur in (Into the shed), she was awarded the biennial Hugues C. Pernath Prize, and the book was also nominated for the Jo Peters Poetry Prize and the J.C. Bloem Prize. Her latest collection Vonkt (It Sparks) won the Jan Campert prize 2017, the Awater Poetry Prize and was nominated for the VSB Poetry Prize.
Langelaar gives expression to the natural forces that operate between people and between people and their environment – exchanges that turn out to be far from idyllic. In vitalist, sometimes surrealist poems, a fairytale quality verges on grimness. Passion meets death in this work: “lying on his chest / his body liquefies, my legs sink in his torso / my shoulders submerge and my head almost as well / in panic I draw a last gasp / but of course at the final moment / he fishes me out of himself / with his shovel-like hands.”

Her first collection is still full of light, and there is plenty of festivity, though this festive spirit is also brought to a halt. There is plenty of love-making too. Nature is on an equal footing with this human activity, or else it serves as a metaphor. In her second collection, Langelaar identifies, among other things, with a fruit-stone, a worm, blades of grass and a rock. And when human beings are the subject, they are often playthings of greater forces than themselves, as in ‘Het meisje’ (The Girl): “First of all the autumn rips the colours from her face then the organs / palely drain away.” Death is more prominently present here. The poems in italics that feel like ready-mades at the start of each cycle flag up the poems’ position towards man and woman, for instance: “Verbs by which woman is associated as direct object: / assault, rape, married to, feel love for, cling tight to, fuck with, thrash”.

The combination of a playful feeling of astonishment with an energy that reaches as far as death gives her poetry a vitality and sensuality. Light and darkness are close together, with the light in the form of gaiety and ecstasy prevailing in De rivier als vlakte (The river as plain), whereas in De schuur in (Into the shed), it is the dark that prevails. With this highly physical, ‘natural’ poetry, Langelaar belongs to a contemporary Dutch trend that breathes new life into the ‘Fifties’ poetry of Lucebert.

HOLD ON TO YOUR SHELL CITY ZAND SPARK IJMUIDEN

hold on to your shell