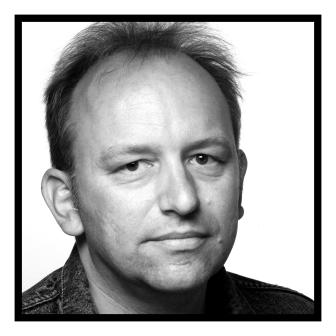 (The Netherlands, 1965)
© Tineke de Lange en Pieter Vandermeer
Biography
On his blog, Marc Kregting, born in Breda in 1965, introduces himself as follows: ‘Marc Kregting was born, had to go to school at a certain point and that’s how it went on.’ He doesn’t add that he studied Dutch language and literature or worked in domiciliary care. His ‘and that’s how it went on’, emphasises that family and education are moulds which give everyone predictable identities.
For Kregting, life is given meaning when it falls outside those moulds, or can avoid them. Writing is a form of escape. He develops escape-routes away from pre-formed identities and unequivocal meanings, for example, through experimentation with personal pronouns. In recent collections Dood vogeltje (Dead little bird) and Zoem! (Buzz), the main character is respectively neuter (it) and indefinite (one). Another escape-route involves intensification of the meanings of words and sentences. Kregting prefers to activate every meaning of a chosen word, giving rise to texts which are tightly interwoven internally, yet also open to interpretation.

Kregting does list his published books in his ‘autobiography’, but there are no author portraits on their jackets. In so doing, he withdraws from the mores of literary publishing, in which the personality cult of the writer is more important than his or her texts. It is often noted in introductions that Kregting has worked an editor. Analysing the operations of the business many writers belong to is a necessity. And it is just as necessary for Kregting to explore the other institutions which determine the significance of social and private life. Escape is only possible if one knows the terrain.

His writing is directed at the development of this kind of knowledge, whether in poetry, prose, essays or blogs. In addition he expands each of the genres through a mix of genre-specific techniques and cross-referencing. In so doing, he achieves a dynamic style which binds his name and his work together inseparably. Marc Kregting was a guest at the 41st Poetry International Festival. This text was written for that occasion.

O fatal laws of attraction In his hair mist droops RESTORATION FALSETTO TREASURES DEPTH What is a hand?

In his hair mist droops, healer’s-fatigued

What is a hand?

COME ON, COME OVER