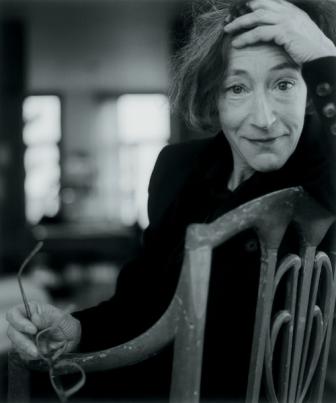 (The Netherlands, 1948)
© Anneke Brassinga / VPRO
Biography
Anneke Brassinga is the language wizard of Dutch poetry. Perhaps the special feeling for language that she possesses has something to do with her work as a translator (of a.o. Nabokov, Beckett and Plath). Whatever the case, you are certain to find words and expressions in her work that you will encounter nowhere else.
Her collected works, which appeared with the title Wachtwoorden (Passwords) in 2005, looks like something of a sanctuary for threatened word species. In it you will find words like ‘nornenkot’ (Norns’ hovel) and ‘dropknotsen’ (liquorice lollies) or ‘het wijdbeense zwerk’ (the straddle-legged welkin). This might induce you to believe that a completely different world appears in her work from the everyday, accessible one. In one of her poems she described the occupation of the poet as follows: “de woordstroper gaat zijn droomstrikken lichten” (the word-poacher goes to inspect his snares). This, however, is no mere rhetoric, no word-play on the play itself, and although Brassinga would also really seem to be in search of forgotten roots of the language, there is more involved; her abundance of language is placed at the service of a sensation that could almost be called mystical. It sometimes seems as if the poet in her work steps outside herself; for her, language is not just a means of communication but also a way of becoming ecstatic.

At the same time, you feel that via her baroque, at times passionate at others burlesque, use of language in which intense experiences of love, despair, doubt play a role – something is at stake: could it be primeval forces? All of this together means that Brassinga’s work – from her debut Aurora from 1987 up to and including her latest collection Ontij from 2010 – leaves a particular impression on her readers, one that cannot be compared with that left by any other poet.

That her exceptional capacity both to evoke emotions and to create an autonomous work of art has been recognised is evident from the prizes she has been awarded for her poetry in recent years: the Herman Gorter Prize, the Paul Snoek Prize, the Ida Gerhardt Prize and the VSB Poetry Prize.

The poem 'Tuin' at YouTube (animation and audio)
Essay on ‘Roeping’ by Joop Leibbrand
Anneke Brassinga at the Koninklijke Bibliotheek, The Hague
Poem by Anneke Brassinga on Raster

THINKING OF ELIOT I GO UP IN SMOKE