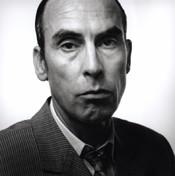 (The Netherlands, 1944 - 2019)
© Tineke de Lange
Biography
Today, December 19, 2019, Jules Deelder passed away. Jules was in more than one way an iconic poet.  As a master of directness, he knew how to strike the heart, the essence of our existence, to cherish life with humor and verbal playfulness and to mock complacency. A poet of style, the personification of Deelderschap, a combination of sharpness, swing and sagacity that no other poet could and can match.As early as 1966, at the great Dutch poetry event Poëzie in Carré, his quality as a performer was clear, a quality that he has shown throughout his life.

His passing is a big blow to Dutch and Rotterdam poetry. Generations of poets and performers know they’re standing on the shoulders of this remarkable poet. For Poetry International too, his death means a great loss. We are grateful that we were able to bring Jules Deelder on stage during the last  edition of our festival, for the eleventh time and still in full glory and with his usual energy. An always human poet who ultimately also had to undergo the fate of every person.

Jules Deelder is undoubtedly one of the Netherlands’ best-known poets. He owes much of his fame to public appearances, in which he combines a dandyish pose with a curious mixture of popular city humor and irony, dished up in an uncut Rotterdam accent. He is arguably the godfather of Dutch performance poets.

There is an unmistakable link between Deelder’s poetry and the Dutch ultra-realists of the 1950s, and an even stronger kinship with the carefree anarchism of the 1960s. Many of his poems are on an exciting collision course with established taste. Apparently, Jules Deelder has found the recipe for successfully combining a deadpan exterior and crass realism with the comic effect of irony. He calls himself a ‘neon realist’, a ‘neon romantic’ and a ‘neon comedian’. Deelder has a rare command of register, mimicking the language of soaps as effortlessly as that of military rhetoric or the quasi-profound verbiage of esoteric or antiquated cultures. He does this in his poetry as well as in his prose, which never fails to betray the poet.

Deelder’s work often tends toward cabaret, but was not cabaret the mainspring of a movement like Dadaism? With the Dadaists he shares a fondness for the absurd, born from a relentless defiance of established high art. He has thus made of himself a kind of enfant terrible of the Dutch poetic scene, but one that cannot be ignored. Several of his poems have achieved the status of ‘modern classic’, and if he is not one of the Netherlands’ most read poets, he certainly is one of the most heard.
© Rob Schouten / Jan Baeke (Translated by Ko Kooman)
Selected bibliography