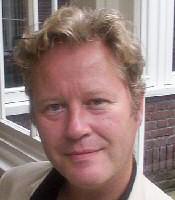 (The Netherlands, 1959 - 2014)
Biography
Erik Menkveld liked for the duration of a poem to slink into the skin of people or objects. For his second collection of poems Schapen nu! (Sheep now!) he chose as his motto a quotation from Zhuang Zi: “Grand is the Creator! What is he now going to make of you? Where is he now going to send you? Will he perhaps make you into the liver of a mouse? Or the leg of an insect?”
Grand, too, was the poet Menkveld, who changes us and himself into preferably ignored or still undiscovered things. Without the light he sheds on them “they are invisible”, to use the words of the light technician he allowed to speak in one of his poems. For his transmigration of souls Menkveld often chose the form of the dramatic monologue or the riddle. Those who got to speak in his poems included the cleaner of a church, a birthday cake, the note F-sharp and timber trees.

Menkveld’s close intimacy with objects made them come alive. This meant he was often reminiscent of the Dutch poet Chr. van Geel, and that impacted the importance of the role that everything which grows and thrives has in Menkveld’s poems. Menkveld’s landscapes are often Dutch: polderland, meadows, farmers, beets. The regular appearance of such words as ‘meticulous’, ‘very specific’, ‘circumspect’, ‘subtle’, ‘exquisite’, ‘deliberate’ or ‘precision’ say something about the attention that the poet pays to detail, both in what he writes and what he describes. Characteristic is the use of adjectives reminiscent of Fritzi Harmsen van Beek: ‘jacket-tailed’, ‘washerwoman-fingerlike’, ‘ fat-cigar-fragranter’.

Menkveld’s poems are often ironic, sometimes even slightly cabaret-like: the wicked world is let in through a chink, but nowhere do things get really nasty. He describes, for example a newspaper in one of his poems as follows: ‘The blood-smeared peacock of all its other/ god-forgotten facts lies for the time being/ doggo and folded in my briefcase.’


© Tatjana Daan (Translated by John Irons)
Menkveld worked for Poetry International as a festival programmer from 1998 to 2002. He will be sorely missed as a poet and as a colleague.