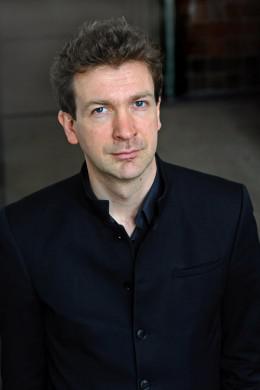 (The Netherlands, 1968)
© Roeland Fossen
Biography
Erik Lindner made his début in 1996 with Tramontane, a collection of poems without literary predecessors: Lindner did not join any group or movement. If there would seem to be any exterior influences in his work, these could best be described as ‘accidental passers-by’ – writers and philosophers who happened to cross the poet’s path. In Tramontane one such passer-by is Walter Benjamin, whose motto “Man’s gaze is his edge” seems to offer a key to Lindner’s poetry.
In his poems, the edge of man’s gaze is the town, a room, or a landscape. Lindner tries to capture the casually perceived movements in language. His poetry is pervaded by the idea that the word creates a coherence. The idea is found again in Tong en trede (Tongue and step, 2000), a collection which, as poet Jan Baeke put it, evokes a reality “which in its seeming triviality brings to light all sorts of wonderful, intangible facets”. This seeming triviality is primarily to be found in Lindner’s images, although ‘observations’ might be a better word: he is a permanent wanderer, a passer-by, who carefully registers the tiny movements of life in a city or the apparent stillness in a room. “So a passer-by explains what passing is:/ a town you leave while you are staying there”, he writes in the opening poem of the cycle ‘Temporary stop’.

In Lindner’s poetry each sentence seems to contain a new registration, and the ‘rapid’ succession of the observations suggests something like the continuous movement in reality, the chaos, or, in other words, the simultaneity of all those movements. But Lindner’s poetry does more than record reality with almost cinematic precision. It also shows what the role of language is here: words order the incoherence of the commonplace, while simultaneously creating a ‘membrane’ between the poet and the perceived.

The tension between the reality of the phenomena in the surrounding world and our perception of it, or to say it otherwise, the transformation in language of what a manifestation can be, proves to be characteristic to Erik Lindner’s work. In his third collection Table (Table 2004), his fourth Terrain (Terrain, 2010) and also in the substantive division of new work in his anthology Acedia (2014) this quality expands even further. Lindner's poems work as snapshots, as evidence of probabilities. The juxtaposition of sentences reinforces that effect, to a greater extent even, by resuming sentences in a slightly varied way, which introduces a serial effect that gives the poetry a strong rhythmic quality as well.

Erik Lindner's poetry is a demonstrative poetry, a poetry that shows. The poems demonstrate what can occur (even if what has occurred is re-constructed in memory). This poetry aims,  as Ulf Stolterfoht so eloquently explains in the epilogue to Erik Lindner’s German edition Nach Akedia, at experiencing happiness, aims at having language revealing what happiness might be. Not as a reflection on the subject, not by ways of anecdotes about happiness, but in expressing the moments when happiness becomes physical.
© Poetry International
“Lindner’s images can nestle in your mind like a melody. There is always a window nearby, there is always water. Cars drive past regularly. There are moments that everything around you becomes Lindner-like.”
Bas Belleman in Awater

In French:
Lindner at the Centre International de Poésie Marseille

When I can escape my words no longer

Witnesses at the threshold