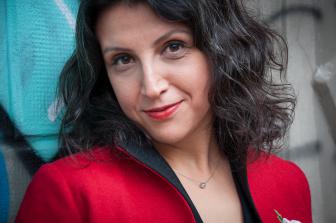 Gonca Özmen is one of the best-known and most remarkable female Turkish poets of her generation. Her poems are playful, rhythmic and original, with language that both reflects and breaches tradition, sometimes in the same sentence. Love is never far away, though she seldom elucidates it in an unambiguous or lyrical way. She allows expectations and desires to clash with all the mistakes, fantasies and untruths that are often associated with love, generally adopting a critical feminist perspective. What Özmen shows above all is how complex and unfathomable the relationships between people can be; all the expectations and assumptions, leading almost inevitably to misunderstandings. Her work also reflects ingrained patterns and attitudes, particularly those of the male gaze on women. Physicality, vulnerability and the values surrounding the female body, play a major role in Özmen’s work: “My body is a gun made of sorrow / aimed at you".

Gonca Özmen is one of the most well-known Turkish women poets of her generation, dealing with various issues from war to love from a feminist critical perspective. Her poems offer an exciting and challenging hybrid: conceptual complexity and the sound of folk-music. Using rhythmic elements extensively, and sticking to clear structural forms, she manages to create a critical approach towards any subject she deals with. Her unique work creates an inviting and thought-provoking atmosphere, in which even the most political statements and unexpected language do not overtake her personal point of view.

Özmen was born in Burdur in 1982 and graduated from the English literature department of Istanbul University in 2004. She wrote her PhD thesis on ekphrasis (“A Revision in the Ekphrastic Poetry of Cubist Male Painters’ Representation of the Female Body”) in 2016.

As early as in 1997, Özmen was noticed as an upcoming young poet and awarded a Yaşar Nabi Nayır Youth Prize. In 1999, she received the Ali Rıza Ertan Poetry Prize. Her first poetry book Kuytumda (In My Nook) was published in 2000 and was awarded the  Orhan Murat Arıburnu Prize. The poet won the Berna Moran Poetry Prize in 2003, and her second book Belki Sessiz (Maybe Quiet) was published in 2008.

Özmen has served as an editor of the literary translation magazine Ç.N. and of PulBiber. Currently, she is one of the editors of the magazine Çevrimdışı Istanbul and a member of the advisory board of the Nilüfer International Poetry Festival and the magazine Turkish Poetry Today published by Red Hand Books. She is also a member of the Three Seas Writers’ and Translators’ Council (TSWTC) based in Rhodes, Greece.

Özmen has participated in international poetry readings in Heidelberg, Hamburg, Berlin, Paris and Slovenia. Her poems have been translated into Spanish, French, English, German, Slovenian and Persian. The Sea Within was published by Shearsman Books in 2011, and her second book, translated into German, appeared from the Elif Verlag press in Germany in 2017.

It Was Your Mouth