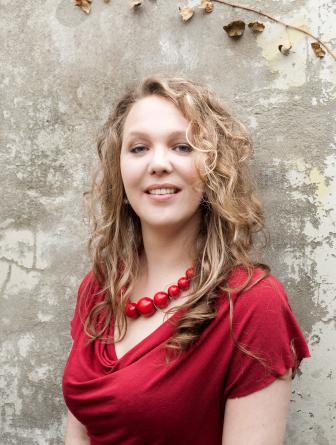 (Belgium, 1982)
© Hadewijch Veys Studio
Biography
Runa Svetlikova dissects reality with lovely little paws and a sardonical smile. She believes that capturing reality in life and poetry is impossible, but she keeps on trying. This is why she thinks the conjuring act of writing is more important than the published result.
I hear myself suggest with care/ that reality’s a fluid concept
First Aid for the Innocent

Life and its ups-and-downs are the focus of Svetlikova’s poetry. Although it is often dark in her brain, and her poetry is raw and direct, the poems also make room for brightness and an irony which is directed at the poet herself. The poems draw from her personal life, but, paradoxically, they are not at all autobiographical. As she states on her website: "The best literature has the same relationship with reality as ordinary life does to that of Paris Hilton in [her reality tv show] The Simple Life”.

In 2014 her debut book This Padded White Room was published to critical acclaim. In fact, she says she was startled by all the compliments, and it took her four years to write a new collection. This Padded White Room was granted the Herman De Coninck Debut Prize, the Jo Peters Poetry Prize and the European Bridges of Struga Debut Prize and nominated for the C. Buddingh’ Prize and the Hugues C. Pernath Prize.

First Aid for the Innocent

The User of This Body