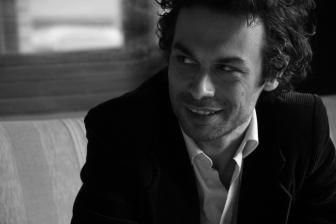 (Belgium, 1974)
© Silvestar Vrljic
Biography
Tom Van de Voorde was born in Ghent, Belgium in 1974. He is a writer, curator of interdisciplinary projects and translator of American poetry into Dutch.
In 2008, he published his first book of poetry, a collection of "contemporary landscape" pieces. The book, entitled Vliesgevels filter (Curtain walls filter) was nominated for the C. Buddingh' Prize for best poetry debut during the International Poetry Festival in Rotterdam, 2009. In 2013 he published Liefde en aarde (Love and earth), his second collection of poems, isolating microscopic stills of political and economic issues. The collection was nominated for the Herman De Coninck prize for the best poetry collection in 2013 and awarded the tri-annual poetry prize of East Flanders. Selections of this collection have been translated into ten languages. In spring 2016, a full length book translation was published in Sweden by the acclaimed publishing house Ramus Forlag.

Tom Van de Voorde has been invited to take part in international poetry festivals in Slovakia, Slovenia, Germany, Macedonia, Croatia, Sweden, France, Canada (Quebec), Italy and The Netherlands. Since 2013 he has been one of the poet laureates at the Versopolis project, a European platform for emerging poets supported by the creative industry program of the European Union.

He has written numerous essays on art and literature, as well as a range of pieces on topics spanning from California, Arcadia, and eternal youth to enemies, Madonna, revolutionaries, folk music and American communists. In the past ten years he has been translating the poetry of acclaimed American poets as Wallace Stevens and Michael Palmer and he is now considered an expert on contemporary American poetry.
Until 2010, Tom was the Belgian editor of the international poetry websites Lyrikline.org and Poetry International Web.

In 2010, he was appointed curator for literature programs at the Centre of Fine Arts BOZAR in Brussels, where he directs literary events. These have included writers Jonathan Franzen, Richard Ford, Douglas Coupland, Ian McEwan, Ohran Pamuk, Salman Rushdie, among others. In BOZAR he has also developed an interdisciplinary series wherein writers dialogue with music and fine arts. He has curated literary projects on modern and contemporary artists such as Cy Twombly, Per Kirkeby, Giorgio Morandi, Theo Van Doesburg and Jeff Wall.
© Patrick Peeters
Bibliography

Meanwhile in the jungle

Admonition of a Tulip