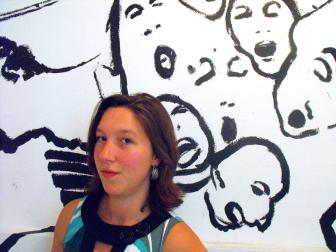 (Belgium, 1983)
© Bruno Van Gasse
Biography
Lies Van Gasse made her debut in 2008 with the collection Hetzelfde gedicht steeds weer (The Same Poem Over and Over Again), which immediately captured the attention of readers and critics. Trained as an artist, Van Gasse often collaborates on art and poetry projects, such as Waterdicht (Waterproof), in which she has illustrated a text written by poet Peter Theunynck. She also creates her own combinations of text and image, in what she calls “graphic poems”; in Sylvia, she disperses her verses with, over and in between drawings made with thick, black ink.
With Annemarie Estor, from 2009 to 2013 Van Gasse developed a project based on the story of Kaspar Hauser, spinning new twists and a new format, enriched with colorful illustrations. As part of their collaborative procedure, each week Estor and Van Gasse wrote a postcard to each other on which they wrote a new stanza. They also invited other writers to contribute to the ever-evolving story. The project has been collected and published as The Book of Hauser.

Van Gasse’s poetry collection Wenteling (Revolution) was an important chapter in her evolution as a poet. In Dutch, "wenteling" has a whole set of connotations, from “a turning motion”, via “revolution”, to “surrender”, “enjoy” and “revel in”. The volume describes one day as it is perceived differently in the minds of various speakers. The speakers find themselves locked in double binds and paralyzing impasses. When they move forward, they stumble upon walls; when they want to move backward, they realize that it is impossible.

The circle, then, is one of the dominant, most frequently repeated images in this collection, which is evident even on a formal level. The poem cycle, and the collection-as-whole, is one of the primary structuring principles underlying Van Gasse’s writing. Rather than composing separate, individual poems, Van Gasse often combines poems into systems held together by repeated themes and rhythmic musical language. She has characterized Wenteling as a “a piece of music in which themes are built into a composition, with nice improvisations or variations here and there”.

Struggle is the main subject of most poems in Wenteling, whether it is the struggle between two people in a relationship; the struggle of an individual to establish a self in relation to the idealized images, dreams and desires of others; or the struggle of the poet with a pen and blank paper. A sense of loss, difficult to heal, looms in every poem, although sometimes irony and humor soften this melancholic tone. Peter Theunynck, co-author of Waterdicht, observes, “Wenteling is an overwhelming, cleverly formulated collection that leaves a lot of questions to the reader. It intrigues from the first until the last stanza and forces readers to read over and over again.”

In her most recent collection Wassende stad, which too received much praise, the above mentioned structure is elaborated on. The poems arrange themselves willingly into cycles and divisions, whilst nevertheless exhibiting a solid internal cohesion. The book uses as its subject all of the different facets of the city, positive as well as negative. This urban theme is very topical at the moment, and creates the possibility of covertly offering societal critique. Although that message is never conveyed in an ostentatious manner, the book does depict the city in a certain way: at times it is an attractive beacon, other times an ominous space overrun by chaos and disorder. Lies Van Gasse sketches in this way “how building leads to decline, which in turn is a condition for rebuilding. Like life itself.”
© Patrick Peeters (Translated by Fleur Jeras)
Bibliography

WE DID EVERYTHING IN REVERSE ORDER

A CROWD DANCES WITH TELEVISION HANDS

INTO YOUR HAIR I LOOSED