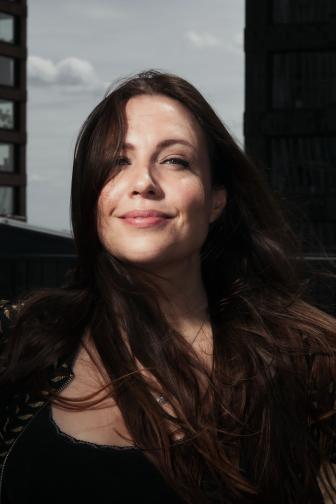 She was convincingly crowned national slam champion in 2009; then two years later she scored again with her work on paper: De steen vreest mij (The stone fears me, 2011) won the C. Buddingh’ Prize for the best Dutch-language debut collection. Ellen Deckwitz has since published five collections and become an important figure in contemporary Dutch poetry. Her latest book, Hogere natuurkunde (Higher Physics), has been awarded the the Herman de Coninck Prize and the E. Du Perron Prize and was nominated for the Grote Poëzie Prijs.

While Deckwitz can be funny and theatrical on stage, her poems in print can cause the reader to feel unease. Her debut collection tells the story of painful family relationships, childhood fears and complete deterioration. Surreal scenes are alternated with unpleasant but humorously portrayed images of an upbringing. Of an alcoholic mother, for example: ‘Our mother should be on a pedestal (one pull)/she has been drinking under the table for years.’

The meaning of Deckwitz’s poems is all but clear, an effect she achieves by having her images hover along the edges of the events, without fully focusing the camera. Imaginative, sometimes fairy tale-like, then suddenly resolute lines easily flow from her pen: ‘We make time / a swatted fly / on the recently cleaned window.’

The threat of water flows within the lines of Deckwitz’s third collection, De blanke gave (The white gift, 2015). Bathwater, meltwater, seawater. The section ‘Waterpsalmen’ (Water psalms), which loosely discusses the Great Flood, Hurricane Katrina and pollution, has an apocalyptic tone. Deckwitz shows the destructive power of water, shows how humans (who largely consist of water themselves), believing they have dominated water, are aiding the oncoming apocalypse.

Her polyphonic, sober, physical and suggestive poems sometimes scratch the surface of reality but do not fully fill in the blanks. They only allow the reader to take a peek. Her poetry tells of people marked by history. Still, being part of large historical moments does not give you a manual for living your life: ‘It is important to know your history / but that doesn’t help you a bit when you’re trying to / fix a leaking fridge.’

Album
Door de straten (Along the streets). As member of Asfaltfeeën (with Ingmar Heytze and Cor van Ingen). Utrecht, 2012

THE GRANDFATHER I DIDN’T HAVE

HE SAID WE NEED TO TALK