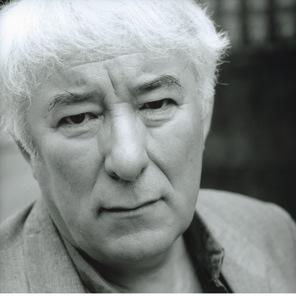 (Ireland, 1939 - 2013)
© Tineke de Lange / Pieter Vandermeer
Biography
Seamus Heaney was born between Toomebridge and Castledawson in Northern Ireland in 1939. He is considered to be one of the most important English-language poets of his generation – certainly since 1995, when he was awarded the Nobel Prize for literature. He is a master of the effortless rhyming of contradictions, a skill in bridging contrasts that can be traced back to his youth.

Heaney spent his childhood in the countryside, an area that not only brought him safety and shelter, as he said in his Nobel Prize speech in 1995, but was also steeped in the immediacy of things: animals, plants, the wind around the house, the sound of the horse in the stable mixed with the muffled conversations of adults and the radio broadcasts of the BBC. That rural world became a permanent fixture in his poetry. It gave him images and metaphors that he used in his poetic reflections to give earthly existence an extra dash of colour.

The place where Heaney grew up, Mossbawn, lies on the border between an English and an Irish sphere of influence. A nice little detail is that the word Mossbawn itself is a hybrid of the English word moss and the Irish word bawn. As Heaney himself has said: “I was symbolically set down between the traces of English influence and the pull of the local world of experience, between ‘the manor’ and ‘the morass’.”

During his studies at Queen’s University in Belfast his poetic talents began to manifest themselves. It was immediately clear that his themes had an Irish perspective, but in his form he also showed himself to be part of the tradition of English poetry, informed in particular by the work of poets like Wordsworth and Larkin. Some of his poems in the New Statesman attracted the attention of the publisher Faber, which led to the publication of his debut collection Death of a Naturalist in 1966. Heaney’s move to the Republic of Ireland gave some critics the impression that he had expressly embraced his Irish roots, but despite the strong engagement with the Northern Irish question (often referred to as the Troubles) that can already be found in his work from the 70s and 80s (especially in North and Field Work), Heaney always remained a poet who, from the perspective of Irish and English culture alike, embraced Western culture as a whole.

With later collections like Station Island and The Haw Lantern the poet’s palate became steadily more pluralistic and idiosyncratic. Heaney developed a completely unique style that subtly refers to all times and places, and in which a fascinating game is played with contradictions and paradoxes. His tone is usually mild and serene, making the existential themes he broaches all the more intense. Heaney recognises the unpredictability of human conduct and actions, and describes this unpredictability clearly and precisely. If there is drama in life (as we know there is), and if poetry can and must testify to this, Heaney shows us that this can best be done by combining individual perspective with sophisticated and flexible language.

Heaney lived for poetry and believed wholeheartedly in its importance. That attitude was convincingly reflected in his involvement in the international poetry world. Unlike many Nobel Prize winners he did not become withdrawn, but embraced his role as ambassador of poetry, as a visible and warm-blooded patron of many a poetry festival and poetry project. Despite that it was often difficult for him, he rarely or never said no, and accepted that because of his status and his prize (which “has destroyed our lives”, as his wife Mary once said) he had a responsibility to pitch in wherever the fight for poetry was being fought.

At the end of his speech upon receiving the Nobel Prize Heaney spoke explicitly about the power, nature and form of poetry. “The form of the poem,” said Heaney, “is crucial to poetry’s power to do the thing which always is and always will be to poetry's credit: the power to persuade that vulnerable part of our consciousness of its rightness in spite of the evidence of wrongness all around it, the power to remind us that we are hunters and gatherers of values, that our very solitudes and distresses are creditable, in so far as they, too, are an earnest of our veritable human being.”

Seamus Heaney passed away in Dublin on 30 August 2013 after a short illness.
© Jan Baeke (Translated by Megen Molé)
Selected Bibliography

DEATH OF A NATURALIST