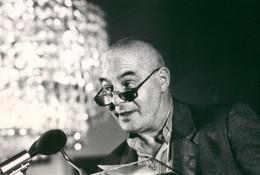 (The Netherlands, 1924 - 1994)
© Chris van Houts
Biography
Lucebert, the pseudonym for Lubertus Jacobus Swaanswijk, loosely incorporates components of his first name. The poet once remarked that he had merely inserted the ce – nevertheless the resultant name is loaded with meaning. His nom de plume echoes various languages: Italian luce and the Old German bert or brecht, which may in turn be likened to the English word bright meaning ‘light or light-giving light’.
The important role that art and religion would come to play in his life and work were not traceable to his origins. Lucebert was born in Amsterdam in 1924. After secondary school he spent six months at the Institute for Applied Art, later the Rietveld Academy; he gained admission to the institute upon the recommendation of its director Mart Stam after his drawing talent had been discovered on the streets. That happy period, during which he fulfilled his thirst for learning and read avidly in the institute’s library, came to an abrupt end when his father, who found him old enough to work, removed him from the institute.

In the early post-war years the breakthrough of experimental poetry was accompanied by so many difficulties that it did not reach the reading public until 1951. However, several years after the Second World War, when he was only twenty-five years of age, Lucebert emerged as a prominent proponent of the Dutch Fifties Movement and of experimental poetry. Art and poetry had to be based on one’s discoveries – the key word was experience – and flow from spontaneous dialogue with the material, paint or language. For example, in ‘school of poetry’ he distances himself from the sweet-sounding voices of “the velvet poets” by proclaiming that: “the lyrical is the mother of the political”; he portrays himself as “a rat in a trap”, the trap of his poetry that “yearn(s) for the cesspool of revolution”. The title is a reference to Herman Gorter, leader of the Eighties Movement and prominent socialist, who in 1897 published his lyrical poetry in a collection titled The School of Poetry.

By mid 1948 friends and colleagues had become aware of his twin talents as a poet and painter. At the end of 1949, there was an international exhibition of experimental art in the Stedelijk Museum of Amsterdam. For the participating poets, Lucebert introduced an evening of poetry readings. He asserted that the Netherlands was ripe for a repetition of “the dadaistic and expressionistic experiment” and claimed that the experimentalists were the first literary “nudists”. The inspiration for this metaphor was drawn from the Flemish poet Paul van Ostaijen, who wrote in 1920 in The Feasts of Fear and Pain, “I want to be naked / and begin.”

The selection provided here includes poems representing various aspects of his poetics. In the ‘introduction’ to ‘spring suite for lilith’, the opening poem in a series of four, the poet distances himself from “bettertalkers” and “deadnettles”, which is to say from fellow poets who write about love in a half-hearted fashion. The poem revolves around the tension between two paradoxes, those of light and darkness. The underlying sun and moon love duo is presented as the ideal in the tradition of poets who wish to serve love “so in light her darkness can be borne/ on upheld hands”. The poet tries to narrow the gap between the two extremes in the name of Lilith, the legendary first woman or the first Eve, who, according to Kabbalistic exegesis of the Biblical book Genesis, preceded Eve and was not willing to yield to Adam.

In ‘I seek in poetic fashion’ the emphasis is less on the formulation of a new poetics and more on the condemning of an old poetics. The phrase “in this age” emphatically links the outcome of old aesthetics to the present and to recent history. The condemnation is achieved by envisaging the outcome of the old poetics or aesthetics: the burnt face of beauty. That outcome is a consequence of the lack of equilibrium between light and darkness, which is perceived as unbearable or stifling. The language is correspondingly marked by defects, hence, “the speech impediments of the shadow” and “those of the deafening sunlight”. From the poet’s perspective “language in her beauty” has little or even nothing human about it because it is marred by an absolute predominance of light.

In one of his most impenetrable poems, ‘ashes all’, Lucebert uses the term “sephiroth”, a central concept in the tradition of Jewish mysticism in which God the creator is specifically seen as a speaker or name-giver. The absolute predominance of God’s creative speaking is represented iconically in an excessively long line of verse finishing with “namer and name”. The name-giver pours out a series of names as though they were mere waste. The succession of names starts with Cain, thus implying the inevitability of a repeating history, commencing with the expulsion from paradise and leading up to the present. This poem is about the Shoah, the extermination of the Jewish population of Europe.

It first appeared in Braak in February 1951, the magazine published by his fellow Fiftiers, Remco Campert and Rudy Kousbroek. Printed on the page opposite was ‘I reel off a small revolution’, a poem that gives unrestrained testimony to the desire to redo creation. Together with Blurb, a magazine edited by Simon Vinkenoog, these periodicals of the Dutch literary fringe continued for just over a year, but they were both instrumental in the breakthrough of the Movement of the Fifties.

The poem ‘angler by ma yuan’ displays great transparency and simplicity. The two three-line stanzas seem to mirror in verse the artwork of Ma Yuan. On the occasion of the poet’s sixtieth birthday, in 1984, this already translated poem was read out in eleven different languages. Soon a Chinese translation will also be available.

‘the very old one sings:’ is a poem full of paradoxes, in which one can witness the autonomy of language at work. On various occasions we see the suffix –less, used to denote negation: “will-less”, “fruitless”, “defenceless”. What is typical is the universality: there is the reference to “everything of worth”; in contrast to “defenceless” there is the word “touchability”. The very old singer of the title reflects on what was and what is to be, on the past and on the future and comes up with the postulation “the heart of time”.

The image employed in ‘poetry is child’s play’, in which the “small scale” upon which one cannot think is simultaneously the allocated lifespan, is crystal clear. Encased in the memory of “doll and ball” is the notion that dying can trigger the realisation that life is mere child’s play and that whilst we fulfil the role of doll, the universe is the ball.

The last poem in this selection was composed in the early nineties. In ‘state of affairs’ the poet seems to express his bewilderment at the war unfolding in former Yugoslavia. Here again there is the association between beginnings and going off the rails: the words “nest” and “violence” appear together in the first line. The poem is an indictment of the book of creation; in the line, “at the smallest graveside speeches are no longer made”, all humanity seems to be lost.

Throughout his oeuvre the poet developed his twin talents in a great number of picture-poems. Yet, after the ‘explosive’ beginning of his poetic career, with three poetry collections published in the space of just over a year, Lucebert settled down to a gentler pace with collections appearing once every other year throughout the fifties. From the mid-sixties onwards there is a silence: it is almost as though the painter has managed to drown the voice of the poet. When finally, in the early eighties, the poetic silence is broken, the collection that emerges is largely devoted to a number of visual artists and painters. A beautiful example of this is ‘james turrell’, an artist of darkness and light in whom the poet recognises himself. He calls Turrell “a smith of light” and understands himself to be “made to transport light like/ a river back to the sun”.
© Anja de Feijter (Translated by Diane Butterman)
The poems by Lucebert published here were selected by Anja de Feijter, who is Professor of Modern Dutch Literature at the Radboud University in Nijmegen, The Netherlands.

All of Lucebert’s poems will be published in English translation by Diane Butterman at Green Integer, in four volumes in the next couple of years. The first volume will appear in 2012.

Further reading about Lucebert (in Dutch)

In Dutch:
Youtube: Lucebert reading several of his poems in Dutch

Koninklijke Bibliotheek: Lucebert at the Dutch Royal Library, The Hague

An article on Lucebert at the Dutch Literary Museum

04. I reel off a small revolution

03. I seek in poetic fashion

THE VERY OLD ONE SINGS: