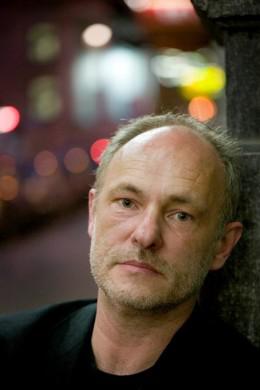 (Belgium, 1960)
© The estate of Patrick De Spiegelaere
Biography
To regularly grace the front page of a quality newspaper for years: for many writers this remains a dream, but not for Bernard Dewulf. Up until last year the poet and journalist, who as of 2010 is the house dramatist at theatre company NTGent, wrote a column for Belgian daily De Morgen every other day. However, like his much enjoyed, poetical columns, his poems bear nothing of the loudmouthed language of newspaper headlines. His poetry is fragile and well-wrought, intimate and full of amazement at life, love and temporariness.
This also became apparent when in 1987 Dewulf was first noticed as a poet in the much talked-about anthology Twist met ons (Argue with us), which contained, beside his own work, poetry by Dirk van Bastelaere, Charles Ducal and Erik Spinoy. Argue with us was announced as the manifesto of a new generation of postmodern poets, but it was immediately clear that Dewulf did not fit the bill, and that, with his lucid, anecdotal poems, he was actually the outsider of the four.

His first collection did not appear until 1995. In Waar de egel gaat (Where the hedgehog walks), Dewulf writes about love, dementia, the relationship between parents and children and how poetry and reality relate to each other. This volume of poetry became one of the most enjoyed debuts in Flemish poetry of the 1990s and was awarded the Flemish Debut Prize (Vlaamse Debuutprijs).

Despite the instant recognition he received as a poet, it was to take Bernard Dewulf another eleven years to publish a follow-up to Waar de egel gaat. In the meantime he built on his career as a journalist and art and culture specialist: he was editor-in-chief of literary magazine Nieuw Wereldtijdschrift (New World magazine) and published articles and essays about the visual arts. Only with Blauwziek (Blue-sick; 2006) did he once again take to the stage as a poet. None too soon: the volume was nominated for the Herman De Coninck prize. As in his debut, in Blue-sick his passion for art in his poetic oeuvre shines through: the poet, for example, lets painter Pierre Bonnard converse with his muse and wife Marthe for an entire cycle.

Observation is second nature to Bernard Dewulf, not only as a means to gather inspiration, but also as a linguistic method to catch a glimpse of the essence of things. There are all sorts of things being watched in his poetry. What is more, he doesn’t come across as a cool observer; on the contrary, in a stylised language he transforms his images and impressions into highly sensitive poems. Whether dealing with the ever quieter world of the elderly suffering dementia, the revealing non-verbal communication of an intimate embrace in bed with one’s lover or with deaf-and-dumb objects like paintings, in his poetry Dewulf wishes to articulate reality – however unutterable it might be. That he lends a voice to those who no longer have one is also apparent from his support for De Eenzame Uitvaart (The Lonely Funeral), a literary project in which poets write a personal poem for someone who has died lonely and read it out at their funeral.

In his most recent work, Kleine Dagen (Small Days), which was awarded the Libris Literature Prize 2010, Dewulf also gives free rein to his sensitive observer. In this collection of stories which resemble prose poems, he puts his day-to-day family life under the microscope: a small world in which small miracles occur, like a daughter slowly becoming a woman or a woman who is still in some ways a child. It is no coincidence that he depicts the sea as the largest monochrome painting of the earth in one of his collections of essays about art: whatever genre Dewulf sets his mind to, his outlook is invariably that of a poet sure of his aim.
© Cathérine De Kock (Translated by Willem Groenewegen)
Selected poetry

from The Litany of Marthe Bonnard