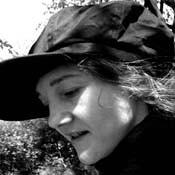 (Denmark, 1970)
© Henriette Bachmann
Biography
Ursula Andkjær Olsen was born in 1970 in Copenhagen. She studied music theory and philosophy and was a student at the Writers’ School in her home city from 1997 until 1999.
Of the relationship between prose and poetry, Andkjær Olsen writes:

“The world as it is seen through human beings consists of coordinates of various kinds . . . Poetry tries to find alternative structures, alternative coordinates to bind things together, and one of the most important basic principles of those other coordinates must probably – in spite of everything – still be called beauty. These alternative principles may be related to image, sound or rhythm, for example.

“The search for rhythm and sound coordinates may seem like something very insignificant – but I believe this quest may actually be able to reveal undersea and oversea connections and thereby possibilities of perception different from those that can be offered by science and narrative art.”

Andkjær Olsen’s poetry meanders along associatively and is linked by recurrent themes in a sort of poetic-conceptual network. Conflict, disagreement and antagonism run through her work, which is often said to be polyphonic, giving familiar words, sayings and expressions new resonance.

In an interview in 2006 about her book Skoenheden haenger paa traeerne (Beauty Hangs in the Trees), the poet explained that she was inspired by “green, green – made up of tiny parts, green – that belongs to no one, green that collapses and rots, green that from a distance looks lavender and blue and hazy”. Her attention to the verdant and botanic continues in her latest collection, Have og helvede (Garden and Hell), from which the three poems she will read at Poetry International Festival have been chosen.
© Annelies van Hees (Translated by Michele Hutchison)
Ursula Andkjær Olsen was a guest at the 41st Poetry International Festival. This text was written for that occasion.

Lulus sange og taler (Lulu’s Songs and Speeches), 2000
Syndfloden (The Deluges), 2001
Atlas over huller i verden (Atlas of the Holes in the World), 2004
Ægteskabet mellem vejen og udvejen (The Marriage between the Path and the Exit), 2005
Skønheden hænger på træerne (Beauty Hangs in the Trees), 2006
Havet er en scene (The Sea is a Stage), 2008) (Nominated for the Nordisk Råd Literarture Prize, the largest literary prize in Scandinavia)
Have og helvede (Garden and Hell), 2010

GARDENSENSIBILITIES THE BOOK OF THE SERPENT (THE NAMELESS)

(THE BOOK OF THE SERPENT)