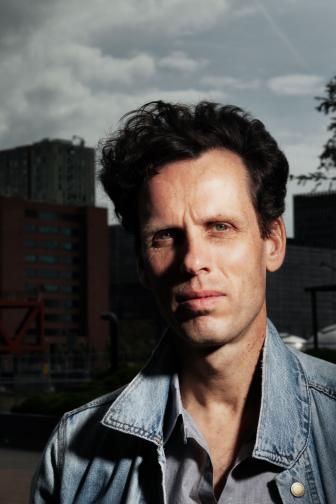 Nyk de Vries is a poet, novelist, and musician. He was born in Noardburgum in Friesland and studied history at Groningen University. At present he works and lives in Amsterdam. His novels Rozijnkonijn and Prospero came out in the early 2000s, and although de Vries hardly sat still during those years, it was over 10 years until his next novel, Renger, was published by De Arbeiderspers in 2015. Renger, a road movie in the shape of a novel, has been described as ‘David Lynch in the Frysian woods’. Growing up in Friesland has been a recurring theme in his work. All of his fiction has been published in both Frisian and Dutch.

In the course of his creative work, De Vries unintentionally happened upon the prose poem. He considers the texts to be byproducts of his own stream of thoughts about apparently unimportant or trivial matters. His poems are short, strange and melancholic, and he strives for compactness, combined with a surprising twist. In his collections Motorman & 39 other prose poems and Things happen because they rhyme, de Vries explores this form of writing.

De Vries’ regular performances of his prose poems are characterised by a forceful style of delivery. Usually supported by music, he has appeared on a variety of international stages. The auditive experience is important to de Vries, who, amongst other projects, has adapted Renger into a radio play. A true centipede, de Vries also teaches creative writing at ArtEZ art academy in Arnhem.

I DIVED INTO A BAY

Down with a Cold