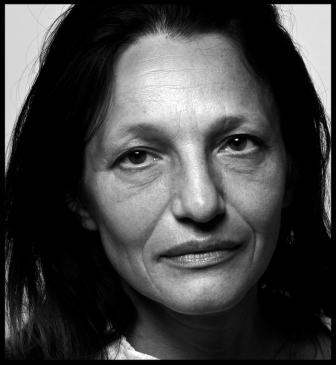 (Moldova, Republic of, 1960)
© Tineke de Lange en Pieter Vandermeer
Biography
Katia Kapovich (1960) is a bilingual Russian poet. Born in Chişinău, the capital of Moldova, she later lived in Moscow and St Petersburg. Unable to publish her work in the former USSR because of her participation in a samizdat dissident group, she emigrated, moving in 1990 to Jerusalem, where she published her first collection, and then in 1992 to the USA. In 2001, US Poet Laureate Billy Collins selected her for a Witter Bynner Fellowship from the Library of Congress, and she has also been Poet-in-Residence at Amherst College. Kapovich now lives in Cambridge, Massachusetts, where she co-edits Fulcrum: an annual of poetry and aesthetics.
Kapovich writes in both Russian and English. Her poems are often quasi-narrative in nature, suggesting stories and events of which the precise details remain untold. The émigré poet and friend of Joseph Brodsky, Lev Loseff, has written that for Kapovich “a life that can’t be described poetically is not worth living”. Yet as she writes in ‘Hero’, “Sometimes truth necessitates madness, and beauty is hidden / behind obscure details.” And so her poems, with a wry sense of humour, address and meditate on the lives of those who have survived – or have tried to endure – war, terror, loss, injustice, trauma, displacement and marginalisation. The people described in her poems are on the move, from one country to another, from one job to another, one street to the next. Night watchmen, political dissidents, panhandlers, draftees, ticket-takers – all are outcasts and virtually homeless, pinching themselves to see if they are real. Yet her work fights off despair at every turn; although life can be arduous and disheartening, as she writes in ‘People versus Trees’, one eventually learns that “only through a lack of leisure can one perceive / the beauty of creation”.
© Don Share
Katia Kapovich was a guest at the 41st Poetry International Festival. This text was written for that occasion.

A PAPER PLANE TO NOWHERE

At the Kishinev School for Deaf and Mute Children