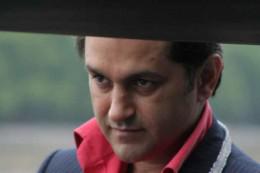 Abdolrezaei is a poet, writer and literary theorist with 38 books in multiple languages. Before 2001, when he had to leave Iran, he was one of the most innovative poets of the new Persian poetry.  He has since been prolific and although he started to write in English with his Short and little like i, Persian poetry and fiction remain the mainstay of his work.
Abdolrezaei has had an undeniable effect on many poets of his generation through his poetry, speeches and interviews. He is also one of the few poets who succeeded in expressing his unique poetic individuality. His varied books of poetry endorse his poetic creativity and power. Nearly all well-known poets and critics of Persian poetry have written about Abdolrezaei’s work. His poetry is translated into many languages (e.g. see bibliography).

After 13 years of exile and a publishing ban in Iran, in 2013 the government allowed his publisher to release four of his new books. These were so well received that they were reprinted several times in three months. However, after seven months, his books were confiscated from the Tehran Book Fair, and he is banned from further publication.

Translated poems of Abdolrezaei are also available on HAFTAD. In these assembled short pieces, a glimpse of Abdolrezaei’s poetic intentions and range is available to English readers.

Love through a Window