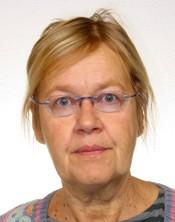 (Finland, 1947)
© Vidar Lindqvist
Biography
Tua Forsström (1947) is one of the most important poets of Swedish-speaking Finland, her work consisting of small, delicate collections of poetry. She has won all the major poetry prizes in her native land, and her work has been translated into Danish, German, English, Italian, Finnish, French and Dutch.
The backdrop to Tua Forsström’s poetry is her home region, her beloved Nyland, with its skerries, forests and beaches on the Gulf of Finland. That is where she was born and still lives, even though she also has a flat in the Finnish capital. She also studied literature in Helsinki, at the Swedish section of the university. For a while she worked for the publishers Söderström, but has for some time earned her living from writing.

Tua Forsström’s poems are extremely readable, simple in their language and melancholy in tone. They have an intellectual streak, with references to classical literature, philosophy, cultural-historical studies and the visual arts. The dramatic elements are relativised with deadpan humour and metaphors from the animal kingdom. The most important motif complex is love, elaborated in a network of contrasts: short, intense moments of happiness and irreparable breaks, sorrow and rage, madness and loneliness, taboos and survival strategies. The narrator of the poetry is a sensitive woman who strives to preserve her dignity in situations of crisis. Individual problems are placed in a broader context of alienation and existential loneliness and refer to the malaise of the Western world.

The collection Efter att ha tillbringat en natt bland hästar (1997) / After Spending a Night among Horses (2000) gained the most prestigious Scandinavian literary award and was translated into Danish, English and Dutch. The poems form an on-going dialogue with the Russian director Andrei Tarkovsky. The I-figure reflects her loneliness and anguish in his films about tormented artists, thereby relativising her own problems.
© Lisette Keustermans (Translated by John Irons)
[Tua Forsström is to appear at the Poetry International Festival, Rotterdam in June 2009. This text was written for this occasion.]

Never Make Friends with a Crow

The City was Sparkling

THE ANGELS IN KARIS