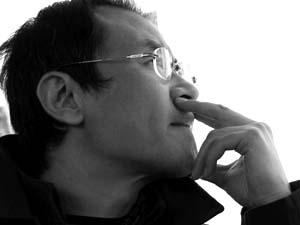 (China, 1962 - 2010)
© Zhang Zao
Biography
By turns erotic and enigmatic, Zhang Zao’s poetry is driven by two compulsions: to push language relentlessly beyond its routines and to make life new through words. As he put it himself, the goal of his work is to “transform one’s self and life”. In the course of this odyssey, readers are treated to astonishing feats of lexical acrobatics together with repeated metaphorical somersaults that shock with their violent grace.
Zhang Zao described himself as a “citizen of the world”. He left China for Germany in 1986 and, since the early 1980s, created a style of poetry that fuses Chinese and Western sensibilities.

Zhang Zao was born in December 1962 in Changsha, Hunan province. After completing his undergraduate studies in the foreign languages department of Hunan Normal University, his intense interest in Western literature took him to Sichuan where he took out a master’s degree in English and American literature, before leaving for Germany to undertake further studies.

Zhang Zao began writing in the early 1980s, inspired by the so-called “obscure” poets who emerged after the death of Mao Zedong in 1976, but determined to go beyond these writers in terms of his experimentation with language. Although unable to publish at that time, he circulated three photocopied collections of his work, April Anthology, Apple Wood and Who Was Here?. At the same time, he also undertook the translation of Western poetry and has expanded his repertoire of foreign languages to include French German and Russian as well as English.

Zhang Zao is an elusive writer. In a statement quoted by the poetry critic Tang Xiaodu, he described his vision of poetry in the following terms:

“Personally, I do not subscribe to the view that modernity equates with the abandonment of a Chinese-language mythology; nor do I approve of an ignorant, befuddled writing devoid of any awareness of personal initiative — these notions of poetry won’t take us very far. At the same time, if our poetry does go in quest of a specific Chinese-language quality, then it must inevitably undergo the baptism of the complete semantic environment belonging to the Chinese language as a whole, an environment permeated with this quality. Naturally, you have to be immersed in the attitude to writing promoted by the core poetic ideals of Chinese poetry, namely, that words are not the things they describe, and that poetry must transform one’s self and life.”