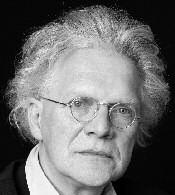 (The Netherlands, 1948)
© Ilse Schrama
Biography
Presumably after much experimentation, F. van Dixhoorn found the best form for his language fragments. Since 1994, he has published four collections of poems in which there is an underlying basic pattern. A Van Dixhoorn typepage looks like this : the typographical space counts sixteen lines – including white ones. This space provides shelter for notes that originate from a word-ocean of memories, dinner table conversations, nature diaries, thoughts and preoccupations.
The sometimes menacing, sometimes mild-mannered sentence fragments are open to many different interpretations, and can be made to form various clusters. Another striking feature is that counting takes place in the poems themselves, as if a beat or a march tempo were being played. Despite this, the regime is not completely rigid. Although there is something of a regular pattern to be found in his early poems, 1-2-3-4, 1-2-3-4 (and so on), the poet/composer allows himself an ever greater degree of freedom within the system he himself has devised. A fixed ground pattern creates the possibility of infinite variation.

What is so immensely fascinating about Van Dixhoorn’s work is that no matter how random his language looks or how loosely it also appears to hang together, there is a strictly adhered-to structure that all words, numbers and white lines have been judiciously placed according to considerations that cannot be discerned through the text, but should rather be experienced. Van Dixhoorn’s texts do not only work by means of their vocabulary (the sun, the sea, a boat, a monkey, an orange) but make an effort to include the reader (or listener – the poet is a sophisticated performer of his own work) in their idiomatic space. In this poetry, the patterns we are exposed to in large quantities in daily life are made explicit, and scenes are evoked where the coordinates of time (now, then, presently) and space (dream, perception, consciousness) are eager to reach out and shake hands. Van Dixhoorn’s poems invite the reader or listener to be part of the creative process.

In Dutch, English and French:

THE SUN IN THE PAN