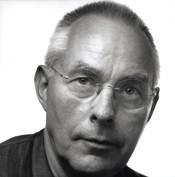 (The Netherlands, 1935)
© copy;Pieter Vandermeer
Biography
Willem van Toorn has published novels, stories and poetry collections since his début in 1959. He has translated work of John Updike, E.L. Doctorow, Stefan Zweig, Klaus Mann, Franz Kafka, and the English poet W.S. Graham. Van Toorn’s translation of a selection of the work of the Italian poet Franco Loi is to appear later this year, together with Van Toorn’s own collected poems, 1960 – 2000.
The title of his latest collection, Tegen de tijd (Against Time, 1997), characterizes all his poetry, in more ways than one. Firstly, it puts in a nutshell what has been the theme of his poetry from the start: the attempt to secure by means of the poem that which is dear but subject to destruction, death and decay. This may be a loved one, or a landscape, a memory. Persistently the poet tries to preserve in language and thereby in the reader’s mind something of the too fleeting, the too transient:

In its straightforwardness and ‘commonness’ the title Against Time exemplifies Van Toorn’s poetic style, his use of unemphatic words, his lack of show and artifice. He frequently uses rhyme, half-rhyme, assonance and alliteration to structure his poems, but always unobtrusively and naturally. On the surface, this style appears as restrained and serene, but deeper down one becomes aware of an undertow of anger and outrage at so much irreparable loss. Van Toorn never indulges in easy melancholy. His protest is quiet, but persistent. Like all protests against the inevitable, it goes against the poet’s better judgement, but it may be more effective than any amount of noisy bluster.
© Erik Menkveld (Translated by Ko Kooman)
[Willem van Toorn took part in the Poetry International Festival Rotterdam 2000. This text was written on that occasion.]

HANS MEMLING: PORTRAIT OF A YOUNG WOMAN IRRGARTEN I was trying to find you like this SONSBEEK, STEREO PHOTOGRAPHY IN HIS HEAD