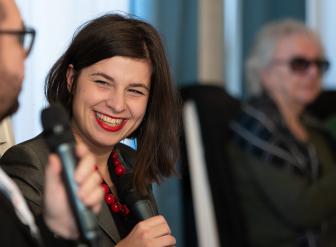 (Croatia, 1990)
Biography
Among younger Croatian poets, Monika Herceg, a student of physics at the University of Rijeka and a member of the editorial board of the journal Poezija (Poetry) published by the Croatian Writers Society, has received the most accolades: six awards in three years. She spent her childhood in a small village near Sisak, where her earliest memories were formed in the shadow of the War of Yugoslav Succession that took place in the 1990s, condemning her family to exile and poverty – something that would, almost three decades later, mark her debut poetry collection Početne koordinate (Initial Coordinates) from which a selection of poems is presented here.

Initial Coordinates may be read as a magical realist novel in verse, exploring the history of a family. The poet threads her way through war, poverty, domestic violence, animal abuse and the decline of village life, to name but a few sorrows: at times lightening the experience with subtle humor, at times making readers face harsh reality. The reliance of  villagers on Slavic mythology is reflected in the form of these poems, which mimic the oral tradition with omitted punctuation and a conversational style. Setting her poetry in a rural area, Herceg draws on her roots and often reflects on how the seasons affect people; she reminds us that, despite technological progress, we still breathe in the same rhythm as nature.

The periodicity of life is reflected not only in the poem’s structure but also in the composition of this collection: it begins in early autumn, hibernates through the winter, wakes up in the spring, toils through the summer and finally ends by late autumn. Even though details within each poem point to her particular family, and encompass a heritage passed on from generation to generation, it is at the same time a work on the formation of personal and collective identity in the light of changing circumstances brought on by political, economic and social changes throughout the history. It is no wonder that novelist and essayist, Miljenko Jergović, calls this collection “the first and the last book of the new Croatian poetry”.

Her poems and short stories have been translated into English, French, Italian, Greek and Macedonian.